Was Return Of The Jedi the best of all the Star Wars films? One writer thinks so. 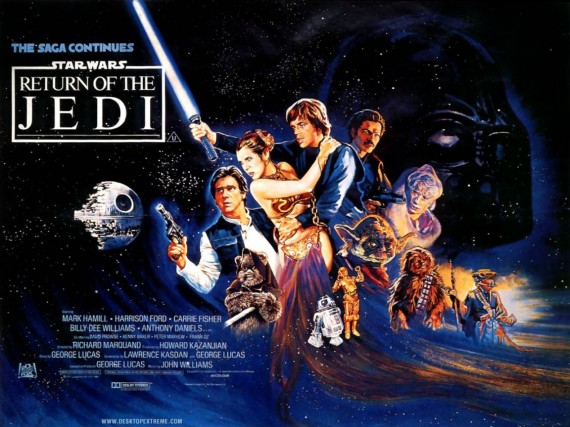 Kevin Drum argues that it’s Return Of The Jedi:

[R]esolving an epic tale satisfyingly is pretty hard too, and on an absolute scale I still think Jedi is underrated. And now that my throat clearing is out of the way, let’s dive right in and address the elephant in the film: Ewoks. You hate them. I hate them. Everyone hates them. But don’t let that blind you. The truth is that there’s less of them than you think. There are, basically, two extended Ewok sequences. The first, when the Ewoks capture Luke and Han, is inexcusable. I won’t even try. But it’s only ten minutes of a two-hour movie. The second sequence is the battle for the shield generator station, and in that one the Ewoks really don’t matter. It’s a set-piece fight, and the Ewoks are just the extras — small, furry extras, but still extras. Ignore them. If someone recut the film to excise most of the first, infuriating Ewok sequence, I honestly think a lot of people would see the rest of it in a whole different light.

So the Ewoks aren’t enough to ruin the film. But what makes it great? For starters, there’s the start. The introductory sequence where Darth Vader pays a visit to the new Death Star is riveting, and its closing line — “The emperor is not as forgiving as I am” — pitch-perfect and perfectly delivered by James Earl Jones — is one of the best of the entire trilogy. What a way to pull you in!

The arc of the story is completely engaging too. There’s the Luke story, the Han/Leia story, and, of course, the Darth Vader story. There are a hundred ways any of these could have been fucked up (cf. the entire prequel trilogy), but they weren’t. Take the treetop scene between Luke, Leia, and Han. This had to happen. We all knew it was going to happen. Any false notes would have wrecked it, but there weren’t any false notes. Mark Hamill, granted, is not filmdom’s finest actor, but even so the whole sequence plays out fluidly and convincingly. When Luke tells Leia she’s his sister, what should she say? The answer is: “I know. Somehow I’ve always known.” And that’s exactly right. Once she’s said it, you know it’s the only thing she could have said.

And then, finally, there’s the finale. For all its Saturday matinee melodrama — and this is, after all, Star Wars’ heritage — the confrontation between Luke, Vader, and the emperor in the emperor’s throne room is, by a mile, the best extended sequence in any of the movies. The dialog is terrific, the pacing is near-perfect, the visuals are spectacular, and the final metamorphosis of both Luke and Vader — which, again, is really hard to pull off credibly and could have been fucked up in a hundred different ways — was instead pulled off flawlessly. And then, in a mirror image of the movie’s start — a terrific short opening scene followed by a longer introductory sequence — the long final sequence in the throne room is capped off by a shorter final scene on the hangar deck between Luke and Vader. This was a genuinely poignant scene. Even the music was perfect.

Drum does make a persuasive case for his position I must say. The final scene in the Emperor’s Death Star II Throne Room is perhaps the best scene in all six Star Wars  movies, only the Luke-Vader confrontation on Cloud City even comes close in my opinion. In that one scene you have all the themes of the original three movies — and to some extent the Prequels although that doesn’t really count since the Prequels were made after ROTJ — coming together at once. The battle between dark and light, the father-son conflict between Vader and Luke, and the question of whether there was still in any good left in the person once known as Anakin Skywalker. The moment when Vader, moved by his son’s punishment by the Emperor and pleas for help, is a fantastic moment of redemption made all the more effective by the fact that Vader doesn’t speak a word during that entire part of the scene, at least not in the original version of ROTJ. And Drum is correct about the extended sequence on Tatooine that results in Han Solo’s rescue, for which we can also thank George Lucas for giving us the most famous fictional slave girl costume ever.

That said, there are flaws in the movie. The Ewoks, of course, are annoying. Not as annoying as Jar-Jar Binks, but pretty darn close. The ease with which they were able to assist three people and two droids in overpowering an entire regiment of Imperial Stormtroops bordered on the implausible, and it made one wonder why the Empire didn’t simply wipe the furry little annoyances out before building THE MOST IMPORTANT SHIELD GENERATOR EVER. And Yoda’s sudden decision that Luke was in fact ready to be a Jedi Knight, after having said he wasn’t only a few months earlier, didn’t quite make sense. Drum argues that flaws like these don’t detract from the movie’s greatness and perhaps he’s right.

But what about the other candidates?

I don’t mean any of the prequels, of course. They are either utterly unwatchable (Phantom Menace), boring (Attack of the Clones), or not nearly as good as they good have been thanks to bad acting and bad writing (Revenge Of The Sith). The original Star Wars movie, though, still holds up after all this time. In fact, I’d argue that you could watch just that movie, and nothing else, and still find yourself watching a darn good story. The same thing goes for Empire Strikes Back. Remember, Lucas was setting out to make high quality cinema here — none of these movies would be anywhere on my list of the 10 greatest movies I’ve ever seen, for example — he was trying to entertain people. His inspiration, or at least so he was telling people in the 70s and 80s, were the old Flash Gordon and Buck Rogers serials. Somewhere along the way, though, Star Wars started to be viewed as something far more serious than it either was, or was ever intended to be. Even people like the late Joseph Campbell were writing things trying to place Lucas’s movies in the same category as the great myth-stories of human history. That was pretty silly. They were supposed to be two hours of fun, and that’s what they turned out to be. Judged from that perspective, I would submit that either of the other two movies in the original trilogy would qualify for the “greatest” title just as much as Drum contends Jedi does.