The Moon is Gay

The peculiar habit of some Indo-Europeans of assigning gender to nouns is frustrating and amusing.

Eugene Volokh passes along this from Ryan North’s Dinosaur Comics: 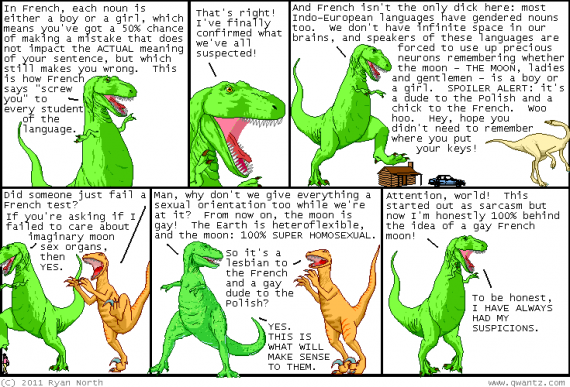 Mark Twain had a famous bit about this, “The Awful German Language,” in his 1880 book A Tramp Abroad. A taste:

Surely there is not another language that is so slipshod and systemless, and so slippery and elusive to the grasp. One is washed about in it, hither and thither, in the most helpless way; and when at last he thinks he has captured a rule which offers firm ground to take a rest on amid the general rage and turmoil of the ten parts of speech, he turns over the page and reads, “Let the pupil make careful note of the following exceptions.” He runs his eye down and finds that there are more exceptions to the rule than instances of it. So overboard he goes again, to hunt for another Ararat and find another quicksand. Such has been, and continues to be, my experience. Every time I think I have got one of these four confusing “cases” where I am master of it, a seemingly insignificant preposition intrudes itself into my sentence, clothed with an awful and unsuspected power, and crumbles the ground from under me. For instance, my book inquires after a certain bird — (it is always inquiring after things which are of no sort of consequence to anybody): “Where is the bird?” Now the answer to this question — according to the book — is that the bird is waiting in the blacksmith shop on account of the rain. Of course no bird would do that, but then you must stick to the book. Very well, I begin to cipher out the German for that answer. I begin at the wrong end, necessarily, for that is the German idea. I say to myself, “Regen (rain) is masculine — or maybe it is feminine — or possibly neuter — it is too much trouble to look now. Therefore, it is either der (the) Regen, or die (the) Regen, or das (the) Regen, according to which gender it may turn out to be when I look. In the interest of science, I will cipher it out on the hypothesis that it is masculine. Very well — then the rain is der Regen, if it is simply in the quiescent state of being mentioned, without enlargement or discussion — Nominative case; but if this rain is lying around, in a kind of a general way on the ground, it is then definitely located, it is doing something — that is, resting (which is one of the German grammar’s ideas of doing something), and this throws the rain into the Dative case, and makes it dem Regen. However, this rain is not resting, but is doing something actively, — it is falling — to interfere with the bird, likely — and this indicates movement, which has the effect of sliding it into the Accusative case and changing dem Regen into den Regen.” Having completed the grammatical horoscope of this matter, I answer up confidently and state in German that the bird is staying in the blacksmith shop “wegen (on account of) den Regen.” Then the teacher lets me softly down with the remark that whenever the word “wegen” drops into a sentence, it always throws that subject into the Genitive case, regardless of consequences — and that therefore this bird stayed in the blacksmith shop “wegen des Regens.”

N. B. — I was informed, later, by a higher authority, that there was an “exception” which permits one to say “wegen den Regen” in certain peculiar and complex circumstances, but that this exception is not extended to anything but rain.

There are ten parts of speech, and they are all troublesome. An average sentence, in a German newspaper, is a sublime and impressive curiosity; it occupies a quarter of a column; it contains all the ten parts of speech — not in regular order, but mixed; it is built mainly of compound words constructed by the writer on the spot, and not to be found in any dictionary — six or seven words compacted into one, without joint or seam — that is, without hyphens; it treats of fourteen or fifteen different subjects, each inclosed in a parenthesis of its own, with here and there extra parentheses which reinclose three or four of the minor parentheses, making pens within pens: finally, all the parentheses and reparentheses are massed together between a couple of king-parentheses, one of which is placed in the first line of the majestic sentence and the other in the middle of the last line of it — after which comes the VERB, and you find out for the first time what the man has been talking about; and after the verb — merely by way of ornament, as far as I can make out — the writer shovels in “haben sind gewesen gehabt haben geworden sein,” or words to that effect, and the monument is finished. I suppose that this closing hurrah is in the nature of the flourish to a man’s signature — not necessary, but pretty. German books are easy enough to read when you hold them before the looking-glass or stand on your head — so as to reverse the construction — but I think that to learn to read and understand a German newspaper is a thing which must always remain an impossibility to a foreigner.

Of course, American English has to be horrible to a foreigner, too, since it’s an amalgamation of so many different languages and thus lacks conventions for spelling and pronunciation.