While the glass ceiling in high-level posts was shattered decades ago, men still dominate the field. 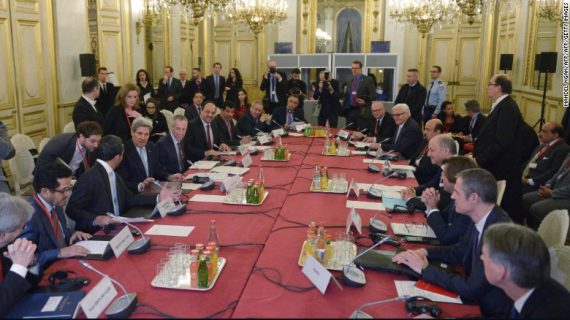 A longstanding conversation in national security circles, long pre-dating the #MeToo awakening, has been the vicious cycle that works against women rising to positions of prominence. While Jeane Kirkpatrick was our UN ambassador way back in 1981, Madeleine Albright broke the glass ceiling at Secretary of State  in 1997 and Condoleezza Rice became the first woman to serve as National Security Advisor in 2001—with other women subsequently serving in those roles—the fact remains men dominate the ranks of national security professionals in government, media, think tanks, and even academia.

Amanda Taub and Max Fisher  give some idea why in their recent NYT essay, “If Only Quoting Women Were Enough.”

But the truth — we are reminded every time we try to quote female experts — is that the gender balance of our articles is only the final step in a process of gender discrimination that begins long before we pick up a phone to begin reporting. We’ve learned to see our role as journalists as important, but also as just the most visible component of a vast social machinery that equates expertise with maleness.

For instance, Twitter is a valuable tool for finding research and researchers. But while it is open to both genders, women often face higher costs for using it, in the form of harassment, particularly sexual threats. Because men can use the platform more freely, their voices and work get a relative boost, making it even harder for women to break through.

Other biases are even more glaring. A 2013 study found that political science papers by women are systematically cited less than those by men. Sara McLaughlin Mitchell, a University of Iowa political scientist, found that women in academia are more likely to get stuck in less prestigious jobs or leave their fields entirely because of structural gender issues like citation biases, straightforward sexism and pressure on women to do committee work while men get to devote time to their research.

The result is that the highest echelons of academia, think tanks and research institutions are dominated by men. So if we go by seemingly objective criteria like seniority or citation counts, the “best” experts will overwhelmingly be men. We can’t fix those imbalances on our own, but we can try to correct for them in our own writing by ignoring seniority and deciding for ourselves whose work is worth quoting. We start by looking offline to find equally qualified — or, often, better qualified — women, by scanning academic journals and asking around for names.

That, unsurprisingly, can rankle people. It can rankle the men who believe we skipped over them unfairly and the institutions that wish to promote their most senior figures. Tellingly, some think tanks that publicize all-female panels also bar junior fellows from speaking to the news media, silencing the women in that role. And it can rankle readers, some of whom inevitably ask a variation of, “Isn’t that just more discrimination?”

This is the challenge of systemic gender bias. No one person can fix it, even with the benefit of a platform as powerful as The New York Times. But conscious efforts to correct for its effects can, at a glance, look unfair because the biases that privilege men, while far more systemic, are often less visible. Last November, over 200 women in national security signed an open letter warning that sexual assault, harassment and “environments that silence, demean, belittle or neglect women” were driving their female colleagues from the field. And a 2015 analysis by Micah Zenko and Amelia M. Wolf found that women were sharply underrepresented in think tank leadership and senior government positions relating to foreign policy and national security.

At first blush, there’s a certain If You Give a Mouse a Cookie quality to the dynamic. Each step taken to get women’s voices into the conversation reveals the need for another step. While we’ve come a long way—again, there have been a lot of women in key roles for a long time and the depth of the bench is definitely increasing—there are all manner of structural barriers to achieving parity.

As with other professions, sexism and sexual harassment play a part as does the fact that women are disparately impacted by bearing and raising children. And, as Taub and Fisher note above, men benefit from first-mover advantage and a natural propensity to be louder and less deferential.

It’s important that journalists and panel organizers are consciously putting forth the effort to include more women. Yet, all of the places where journalists and panel organizers typically look for experts are dominated by men. So, not only does including women require more effort it also means changing standards because the most experienced, most cited, most famous, most published, most Tweeted, etc. in the field are likely overwhelmingly men.

This is all complicated by human nature. We’re predisposed to look for the easiest and most familiar choice. Show producers go to their tried-and-true guest list. The same old white guys who’ve been on the Sunday shows since the 1980s are still available, so it’s easier to bring them back than to look for fresh faces. And the viewers know who the old guys are. They might not tune in to see what a young woman they’ve never heard of has to say.

Additionally, bookers love guests who will reliably say Yes. The people you say on TV or hear on the radio aren’t necessarily the best experts to talk about a given subject but the most readily available. As already noted, producers have their go-to experts and will almost always start there rather than digging deep for someone who studies that problem in depth. Those who decline interviews because they’re unwilling to talk about things where they have little knowledge—which includes myself but almost certainly a greater percentage of women than men—will start getting fewer requests. Those who turn down interviews because they have family obligations in the evenings or on weekends—which again, is disproportionately going to be women—will start getting fewer requests.

The problem is compounded by age bias. Many in the business reflexively associate age and experience with wisdom and competence. Most think tank panels and even larger gatherings like the World Economic Forum and the Munich Security Conference overwhelmingly feature and are attended by those over 60, and certainly over 50. Those in their 20s and even their 30s and 40s are often looked at as being too green to have much to contribute. While I’m cognizant of this bias, I’m often guilty of it. Given that women in the business are likelier to be younger, they’re often facing a double whammy.

Some of this is fixable. But much of it isn’t. Or, at least, the fix requires a major reordering of our broader culture. Women themselves have increasingly drawn attention to the problem and are making some inroads into changing attitudes. Organizers are less likely to put together “manels” less they be shamed. Eventually, we’ll move past putting the token woman on the panel as either a moderator or afterthought but recognize that the discussion is simply incomplete without a diverse perspective.