The problem goes beyond the War on Drugs.

Will Wilkinson follows up on some recent comments by President Obama on the need for criminal justice reform.

To really roll back the prison-industrial complex, it is necessary to reduce sentences for violent criminals at the state level, too. That’s a tougher sell. It involves not only considering its racial inequities and costly bloat, but also the moral failures of a system that doles out punishments that are out of proportion with their crimes.

To weigh the merits and morality of America’s incarceration rate, it helps to remember why it started booming. It began in the 1980s, when high crime led district attorneys to send more people to prison, and for longer sentences. The country’s “war on drugs” introduced strict sentencing guidelines, which reduced the discretion of judges and parole boards. In their 2013 study “Why are so many Americans in prison?“, Steven Raphael and Michael Stoll, professors of public policy at Berkeley and UCLA, found that changes in sentences for drug offences were important, accounting for about 20% of the increase in the incarceration rate. However, harsher sentences for violent criminals accounted for nearly half the rise. Between 1984 and 2009, the time typically served in state prisons increased by roughly five years for murder, three years for sexual assault, eighteen months for robbery and six months for burglary. A significant reduction in the incarceration rate will require rolling back prison terms for these crimes, too.

That’s an important point: while the so-called War on Drugs is a major culprit, it’s neither the only nor the most significant one. We’ve simply made a decision as a society over the last 30 years to treat offenders much more harshly. Here’s a graphical representation of the trendlines: 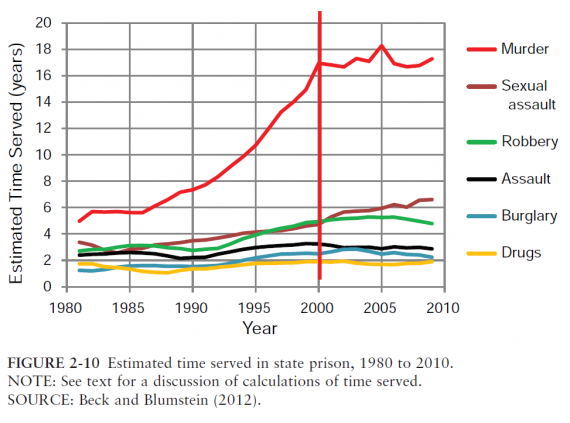 Until a decade or so ago, I strongly concurred in the decision. Alas, as Wilkinson points out, most of the arguments and impulses that led us there have little basis in fact:

Defenders of harsh sentences claim that they both deter crime and prevent it by keeping many criminals off the streets. The evidence for deterrence is weak. A 2014 report on incarceration from the National Academy of Sciences explains that criminals are deterred primarily by the risk of getting caught; longer sentences have had no discernible effect. Longer prison terms affect crime rates mainly through the “incapacitation effect”, which keeps those most prone to crime locked up. However, as Messrs Raphael and Stoll explain in a paper for the Brookings Institution, the incapacitation effect peters out considerably as the incarceration rate rises. The worst criminals tend to get locked up even in much more lenient regimes. Locking away large numbers of less dangerous people for long periods delivers very little in additional public safety. Given how high America’s incarceration rate is, it is fair to say reducing it won’t precipitate a crime wave. Many convicts serving long sentences were never generally dangerous, or have mellowed with age, and no longer pose a threat to the public.

Messrs Raphael and Stoll point to the recent example of California. A court decision declaring prison-overcrowding unconstitutional led the state in 2011 to pass reforms that ended the practice of sending convicts back to prison for technical parole violations. The result was that some 20,000 convicts who otherwise would have been sent to prison remained free. The state incarceration rate reverted to 1990s levels without an attending rise. Indeed, studies found no effect on violent crime and a small effect on property crime. (Each year of prison not served due to California’s reform was estimated to cause an additional 1.2 auto thefts.) However, the social cost of a stolen Corolla is not clearly greater than the cost to taxpayers of a year of prison time. “[H]arshness in sentencing often results in prison spells that cannot be justified by the risk posed by the offender,” Messrs Raphael and Stoll observe.

Wilkinson’s academic training is in philosophy, so he goes there, too:

Harsh sentences may not do much to ensure safer streets, but maybe criminals deserve them. Plenty of people think that America’s incarceration rate reflects the justice of retribution. But this theory has some holes, too. To lock someone in a cage is to strip him of all liberty. Most of us think this sort of total deprivation of freedom can be justified when a crime is serious enough. And most of us think that very serious crimes can justify very long spells of captivity. A rule of proportionality applies. Punishment must fit the crime. Keeping people in jail too long adds a new injustice to the original crime. If someone commits a crime that merits five years in prison, but is kept in captivity for ten, then five years of his or her life have been unjustly stolen in much the same way that the life of a kidnapping victim, locked away for five years in a basement, has been stolen. It’s a horrible injustice either way.

So what are we to make of the leap in time typically served for violent crimes between 1984 and 2009? Either we were unjustly lenient then, or we are unjustly punitive now. Did we only lately wake up to the real gravity of murder, or are we now overreacting?

The fact that America’s previous practices were more in line with those of the rest of the civilised world today ought to lead us to suspect that America is now punishing its violent criminals too harshly. America’s prisons may therefore be teeming with many thousands of people who have already served sentences equal to their crimes, yet remain in captivity, deprived of their liberties and rights, like kidnapping victims or slaves.

Of course, most citizens don’t think that way. By definition, they (and a younger me) would argue, criminals have forfeited most of their rights as fellow citizens by breaking their contract with society.

“But they’re violent criminals!” you say. “Rapists and murders!” Indeed, many are. And they have been, and are being, duly punished for their crimes. Those who have served a proportional sentence, and have proven themselves worthy, deserve to be restored to public life.

Tough-on-crime types are likely to rebut this sort of position with arguments about deterrence and public safety. And it’s true that keeping people in prison too long prevents a little crime, though not much. However, deterring crime by keeping people in prison too long is equivalent, from a logical and moral point of view, to rounding up ex-cons who have already served their time and throwing them back in the clink for a while, even if they’ve committed no new crimes, simply because some of them eventually will. We wouldn’t stomach this kind of pre-emptive incapacitation. So Americans shouldn’t be willing to tolerate it when it involves keeping people in prison after they deserve to be released.

But, of course, we’re a society that no only tolerates but jokes about prison rape.  It’s very difficult, indeed, to see the issue of prison injustice getting much sympathy, even with President Obama in full Honey Badger mode.*

Interestingly, though, the president is getting some support across the aisle for at least modest reforms:

Mr Obama is starting small, calling for increased judicial discretion for non-violent drug offenders. John Boehner, the Republican Speaker of the House, has indicated his support for reforming federal sentences for non-violent drug crimes, which means something might actually get done.

Not that Boehner’s support makes this a done deal, of course, especially in an election year. Certainly, it’s a risky issue to take on in a nomination fight with sixteen candidates. Still, it’s an interesting issue and one that’s consistent with conservative principles. Not only would radically reducing the number of crimes for which we incarcerate people and reducing the sentences for all but the most heinous crimes be fiscally responsible but it would also radically reduce the power of government.

*Many of the president’s friends and foes alike have noted in recent weeks that he’s been  using his lame duck status in the opposite way that most of his predecessors did, seeing it as freeing him to speak his mind and take actions that he might have eschewed earlier in his presidency. The naming on this phenomenon refers to a viral internet video of a few years back. 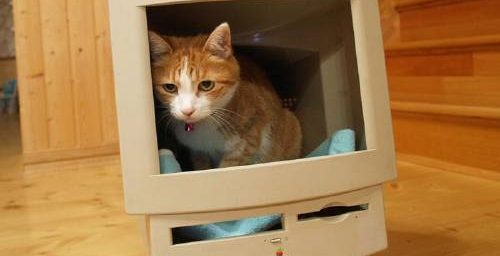 Why the Internet Will Fail