THE INSURGENT AND THE SOLDIER

TIME has a classic, “one man’s terrorist is another man’s freedom fighter” piece comparing the profiles of “Ahmed” and a SSG Richard Bear. 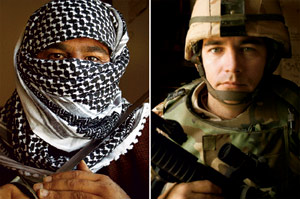 The reporter seems to think they are morally equivalent:

Under the Saddam Hussein regime, “Ahmed” was an insider, a commando who served in the feared Fedayeen Saddam militia. Now he’s a guerrilla battling the American occupiers who rule his homeland. He spends his days plotting new ways to kill U.S. soldiers and his nights carrying out those deadly raids. His base is Fallujah, the town 30 miles west of Baghdad that has become the epicenter of the insurgency. Ahmed, 40, who won’t allow his real name to be published for fear of leading the Americans to him, looks more like a simple farmer than a killer: deeply etched lines radiate from the corners of his eyes, and his face is anchored by a stubbly salt-and-pepper beard. But his intentions are lethal. “If you come like a friend, we will say, ‘Welcome,’ and help you,” he says. “But if you come like the Americans did to control us, then we will kill you.”

The two men–an Iraqi insurgent and an American soldier–have more in common than one might expect. Both are fathers who care deeply about their children and their country. Both see their jobs as their duty. Both pray each time they head out on a new mission. “They have their way of fighting, and we have our way of fighting,” says Ahmed, who fingers amber-colored prayer beads as he talks. “Everyone wants to defend his country and his honor.” Says Bear: “I want my wife and family to be proud of me because what I am doing is protecting them.”

Yes, a simple farmer and family man. Who just happened to be a member of Saddam’s gestapo, commanded by Uday Hussein, which “assassinated the Iraqi leader’s enemies, put down protests and ruthlessly cracked down on dissidents since its founding in 1995”. Pretty much exactly like American paratroopers, right?