Unexpected Whiff of Freedom Proves Bracing for the Mideast

The entire Middle East seems to be entering uncharted political and social territory with a similar mixture of anticipation and dread. Events in Lebanon and Egypt, following closely on a limited vote for municipal councils in Saudi Arabia and landmark elections in Iraq, as well as the Palestinian territories, all combined to give the sense, however tentative, that twilight might be descending on authoritarian Arab governments.

A combination of outside pressure and internal shifts have merged to create this unique moment. Arabs of a younger, more savvy generation appear more willing to take their dissatisfaction directly to the front stoop of repressive leaders. They have been spurred by the rise of new technology, especially uncensored satellite television, which prevents Arab governments from hiding what is happening on their own streets. The Internet and mobile phones have also been deployed to erode government censorship and help activists mobilize in ways previous generations never could.

Another important factor, pressure from the Bush administration, emboldens demonstrators, who believe that their governments will be more hesitant to act against them with Washington linking its security to greater freedom after the Sept. 11 attacks. Washington says it will no longer support repressive governments, and young Arabs, while hardly enamored of American policy in the region, want to test that promise.

Egypt’s tiny opposition movement – called Kifaya, or Enough in Arabic, in reference to Mr. Mubarak’s 24-year tenure – has drawn attention across the region even if the police easily outnumber the few hundred demonstrators who gather periodically outside courthouses or syndicate offices to bellow their trademark slogan. Before, protesters used to exploit solidarity demonstrations with the Palestinians to shout a few abusive slogans against Mr. Mubarak. Suddenly, they are beaming their frustration right at him. “Everything happening is taking place in one context, the bankruptcy of the authoritarian regimes and their rejection by the Arab people,” said Michel Kilo, a rare political activist in Damascus. “Democracy is being born and the current authoritarianism is dying.”

The American campaign for democracy in the Middle East is viewed by nationalists and many Islamists as a conspiracy to weaken the Arabs. The violence in Iraq helps sustain the idea here that the invasion had nothing to do with helping the Iraqis, but rather was part of an American thrust for dominance in the region. Over all, though, many Arabs sense that small cracks are finally appearing in the brick walls they have faced for decades, even if it will take months or even years to determine just how significant those cracks become.

Some activists wonder, for example, if Syria’s governing Baath Party is forced to retreat from Lebanon, how long it will take for demonstrations to emerge in Damascus. “There is such a high percentage of young people who see the future as something totally black,” said Mr. Abaza of the Egyptian Wafd. “If you open even a small window for them to see the sky, it will be a tremendous force for change. But they have to be able to see the sky.”

Of course, to see the sky, you have to look up. 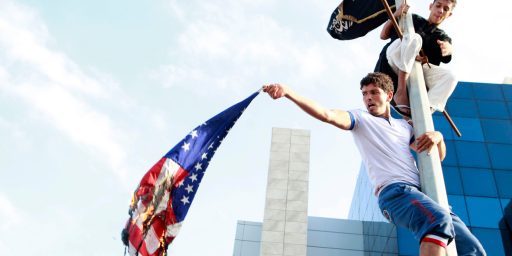