NYT – Voters Are Very Settled, Intense and Partisan, and It’s Only July [RSS]

The idea of a red America and a blue America, Republican and Democratic, two countries separated by a yawning cultural divide, has become a clichÃƒ©, dismissed by many experts as overdrawn. The electorate, taken as a whole, is no more divided over hot-button issues like abortion than it was in years past, those experts arue; a large middle ground still exists on many other issues, like the need for more affordable health care. But the increasing partisanship of the 1980’s and 1990’s has left its mark on politics, culminating in the intensity of this campaign. Most voters have already chosen sides – sometimes angrily, often passionately. The swing voter and the independent, once thought to be the models of the modern voter, are harder to find this year, according to pollsters in both parties.

One telling measure: 79 percent surveyed in the most recent New York Times/CBS News poll said their minds had been made up about whom to vote for in November; 64 percent felt that way in July 2000. Similarly, the Pew Research Center for the People and the Press found that one in five voters this summer were “persuadable,” compared with one in three at this stage in past campaigns. The trend has been building for a long time, many analysts say. Gary C. Jacobson, a political scientist at the University of California, San Diego, said, “Over the past 30 years, after a long period of decline, partisanship has been increasing, in the proportion of people who identify with parties and who act on the basis of that identification.”

Andrew Kohut, director of the Pew Research Center, said that what has changed among voters is not their loyalty to party, per se, but the size of the gap between what Democrats and Republicans think and believe – on the social safety net, the role of government, the image of business. In fact, the ideological lines between the parties have grown sharper, with Democrats more likely to be liberal, Republicans conservative. It was a gradual, but ultimately striking change: 25 years ago, more Democratic voters described themselves as conservatives than as liberals, according to polls by The Times and CBS News. In the same period, Republican voters calling themselves liberals fell from 15 percent to 8 percent. Today, conservative Democrats and liberal Republicans are a dwindling breed.

The Southern conservative wing of the Democratic Party, for generations a power in the region and on Capitol Hill, is now much diminished. Twenty-nine percent of white Southern male voters said they were Republicans in 1972; 49 percent in 2000, according to surveys of voters leaving polling places. Similarly, white evangelical Protestants were evenly divided between the Democratic and Republican Parties in 1987-1988, according to the Pew survey; by 2003, nearly twice as many were Republicans as Democrats. The voters have “sorted themselves out,” as many experts put it, and found their ideological home.

The partisan gap in presidents’ approval ratings soared with Ronald Reagan’s re-election year and remained high with his successors, according to data from the Gallup Poll, which has tracked the subject for 56 years. But it has intensified with Mr. Bush. . . . The war with Iraq and the disputed circumstances of Mr. Bush’s taking office have heightened the animosity among Democrats, many analysts say. Seventy-six percent of the Democrats in the most recent Times/CBS News poll said Mr. Bush was not the legitimate winner of the 2000 election.

Former Senator Warren B. Rudman, the New Hampshire Republican, said that after a lifetime in politics, “I don’t recall the hatred – not just dislike and disagreement, but hatred – that a lot of Republicans had for Clinton and a lot of Democrats now have for President Bush.” Mr. Rudman and many other political veterans note that these passions are expertly stoked by the consultant-driven politics of the modern era. That is, perhaps, especially true this year, when many consultants believe the election will turn on which side best energizes and turns out its core constituents. More fuel for the partisan fires comes from a simple fact: Rarely have the stakes been higher in terms of sheer power. The Reagan era was an ideological time, many politicians noted, but each party had its stronghold and government was neatly divided. Republicans had the White House and, for six years, the Senate. Democrats seemed secure in the House and in statehouses around the country. Now, Republicans have sweeping power – both houses of Congress, the White House and the potential of naming as many as three seats on the Supreme Court over the next four years. But their power is held by the narrowest of margins. “We’re living through a natural period of really intense struggle for power,” said Newt Gingrich, the former speaker of the House and a man widely credited with (or blamed for) bringing a new ideological edge to the chamber. “Until one side or the other succeeds, it will continue to be a slugging match because so much is at stake.”

These things–especially the realigment of both parties along ideological lines and the fact that every seat in both Houses of Congress and every Electoral College vote matters–are huge. I would argue, too, that the changed nature of telecommunications over the same period has been a major contributing factor. The rise of talk radio, 24/7 narrowcasting on television, the Internet in general and the blogosphere in particular, have all helped exaccerbate the tension.

One only has to look at the changing nature of non-political phenomena–which have had none of the realignment and other issues in the NYT piece–to see what I mean. Take the example of sports fandom. ESPN and the various highlight show copycats have encouraged players to draw more attention to themselves, even at the expense of team success, in order to gain celebrity and, hopefully, lucrative endorsement contracts. Sports talk radio has turned up the volume of acrimony and contributed to the need to take premature action, so much so that coaches only a year or two removed from a league championship are routinely fired at the first hint of a losing streak. The expectation of immediate information from all fronts–TV and, especially, the Internet–combined with the ubiquity of talking heads have amplified every personnel move and rumor. There’s no evidence of which I’m aware that the intensity of support for one’s team or hatred of its opponents has changed much, but the overall climate is certainly different. This basic trend is true of other things besides sports and electoral politics. War is different than it once was. Every combat death, beheaded hostage, tactical setback, or rumored WMD sighting gets a hyperbolic level of attention. Similarly, the 24 hour news hole has made any juicy murder a national soap opera. Even the weather has its own channel, nowadays.

With respect to national politics, I would argue that the trends are mostly positive. The perception–common to people as far afield on the political spectrum as George Wallace, Ralph Nader, and Pat Buchanan–that there’s not a dime’s worth of difference between the two national parties is simply untrue. The proliferation of media sources and, especially, the wresting of the exclusive microphone from media elites, has allowed partisans to get the word out that the things being decided are important and that who gets elected actually matters. The wishy-washiness of non-partisanship is largely an unhealthy trend, as it naturally leads to apathy and cynicism. Indeed, the same people who decry the increased partisanship of the current system rail against low voter turnout and lack of awareness of the basic political issues among the citizenry.

While I’m encouraged by the increasing party identification and political energization in the electorate, I share the distaste for the decidedly more bitter tone that everyone seems to agree exists. (Although, to be sure, this is nothing compared to the acrimony that marked the early days of the Republic.) I would much rather see the debate take place over ideas rather than personalities. While there are indeed some despicable characters in positions of power, they are a tiny proportion. I’d much prefer that, absent incontrovertible evidence to the contrary, all hands would presume that the other side is motivated by different priorities and insights rather than nefarious intentions. 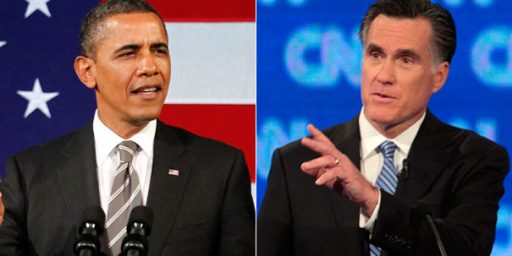