Saud Abu Ramadan* has a piece with that title. Doesn’t the Second Intifada have to end before they can start a Third?

Hundreds of thousands of angry Palestinians participated in the biggest-ever funeral in Gaza City as Sheikh Ahmed Yassin and eight other Palestinians killed in an Israeli missile attack were buried Monday.

The assassination in Gaza of Sheikh Yassin, the founder and spiritual leader of the Islamic Resistance Movement, Hamas, also promises to unleash a new wave of violence between Israel and the Palestinians.

Two Israeli Apache helicopters flew over Gaza City before dawn and waited for Yassin, the quadriplegic 68-year-old Hamas leader, who was praying in the Al Mujama’ Mosque in the Sabra neighborhood, not far from his home.

He stayed in the mosque for about half an hour, and as soon as his three bodyguards pushed his wheelchair outside the mosque and headed toward his home, the helicopters began to fire missiles at him and his bodyguards,” said a nearby resident.

Mohamed Ibrahim, a 25-year-old resident of Sabra, said that despite being wanted by the Israelis, Yassin went to this mosque five times every day. He said Yassin was always smiling and had said, “I welcome death … I am not afraid.”

Why is the fact that he was a quadriplegic and getting old always seem to be prominent in these pieces? His handicap certainly didn’t seem to deter his work in his chosen profession. Wasn’t he a quadriplegic the entire time he was ordering the murder of Israeli children? And I find it hard to be impressed by his pious prayerfulness. Indeed, it’s not until the nineteenth paragraph of the piece that it’s mentioned that he was accused–merely accused–of some illegal activities.

*Were I to ever assume an Arab name for whatever reason, Saud Abu Ramadan is a leading candidate. 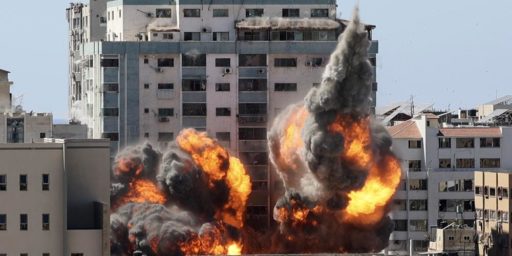