Thirty years after the hostages were freed from captivity in Iran, the United States still hasn't figured out how to deal with the Islamic Republic. 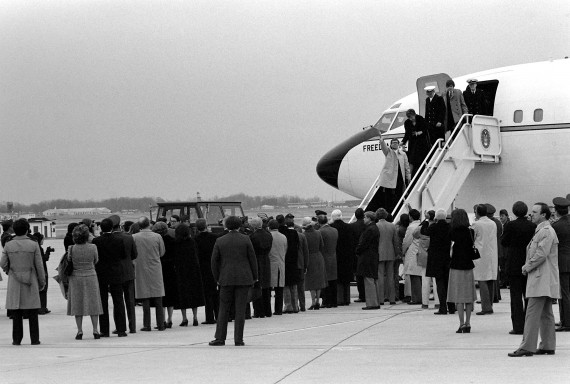 Ted Koppel, who’s career was essentially defined by the Iranian Hostage Crisis, has an interesting piece in the Washington Post today reflecting on the crisis, and how it influenced American and Iranian behavior for the next three decades:

On Jan. 20, 1981, 52 American diplomats, intelligence officers and Marines were finally released after being held hostage for nearly 15 months at the U.S. Embassy in Tehran. Americans saw it as the end of a long national nightmare. Iranians saw it as a successful phase in what the Pentagon would come to call the Long War.

We were wrong; they were right.

On the face of it, the Iranians achieved what they wanted. President Jimmy Carter had labored with key advisers through the last night of his presidency, desperately trying to bring about the hostages’ release before Ronald Reagan was sworn in as the 40th president. The Iranians, though, were determined to humiliate our 39th president and were not about to free the captives on Carter’s watch.

The Iranians stage-managed the drama down to the last second. Precisely at noon, just as Reagan began to recite the oath of office, the planeload of Americans was permitted to take off. The Iranians’ message was blunt and unambiguous: Carter and his administration had been punished for America’s sins against Iran, and Reagan was being offered a conciliatory gesture in anticipation of improved behavior by Washington.

Once the hostages were released, however, no reprisal came, and the Iranian leadership offered no evidence of wanting to reconcile.

What the mullahs learned, Koppel contends, is the extent to which the American media tends to obsess over a crisis. For 444 days, the top story of the day, nearly every day, had something to do with the hostages in the American Embassy in Tehran. Koppel’s career went into the stratosphere when he began anchoring a nightly program titled “America Held Hostage,” which later became Nightline. More importantly, the constant media coverage essentially led to the end of Jimmy Cater’s Presidency. The Iranians watched, and they learned, and they acted accordingly:

On Oct. 23, 1983, a truck loaded with explosives was driven into a barracks building in Beirut housing U.S. Marines, who were there as part of an international peacekeeping force. The driver died in the suicide attack, as did 241 American military personnel. Eventually, the bomber was identified as a member of an organization called Hezbollah, which was believed to have been funded and trained by members of Iran’s Revolutionary Guard Corps.

By the time even that much was established, Reagan had ordered all U.S. military personnel in Lebanon evacuated to ships of the 6th Fleet, off the coast. A brief time later, those ships received fresh orders and sailed off.

One act of terrorism has chased of the “Great Satan,” although in all honesty those Marines probably never should have been there in the first place considering they were sitting ducks in the middle of a civil war. After the U.S. withdrawal, the conflict entered a new phase:

Just as hostages had proved useful to Iran during the Carter administration, they would be used again to manipulate the Reagan White House. Dozens of Americans and Europeans were kidnapped in Lebanon and held hostage during the early and mid-1980s. Again, Hezbollah was believed responsible, and Iranian patronage was more firmly established.

In relatively short order, these tactics would draw the Reagan administration into one of the more bizarre covert negotiations in recent history. Among those kidnapped in Beirut was the CIA’s station chief, William Francis Buckley. He was held and tortured for 15 months, and at one point he was reportedly taken to Iran. He died in captivity. Reagan’s distress over Buckley’s ordeal in particular, and over the fate of other American captives, was a factor behind the Iran-contra affair.

Far from punishing the Iranians, Washington arranged for Israel to sell weapons to Iran. The Israeli stockpiles would be secretly replenished by the United States, which was legally prohibited from selling directly to Iran. In return, Iran would free some hostages. Finally, Iran’s payment for the weapons would be used to buy arms for anti-communist forces in Nicaragua, thereby circumventing a congressional ban on sales to the contras there. That was the icing on the cake.

It was a complete disaster, both politically and from a foreign policy perspective. A President who had said he would never negotiate with terrorists at first tried to deny that his Administration had, in fact, negotiated with terrorists. Then, when the truth came out the whole world knew that taking an American hostage would eventually lead the United States to find a way to negotiate with you. It sent the wrong signal, and, as Koppel notes, it set the stage for 30 years of bad policy:

There was every reason to celebrate the release of those 52 Americans on Jan. 20, 1981. But what Iran learned then and has applied in the decades since has been costly for the United States. Here we are, 30 years after what we thought was the conclusion of a crisis, still wondering if the end will ever be in sight.

I’m not sure what the answer to the Iran problem would be, either then or now. Military retaliation in the wake of the hostage crisis would have been satisfying on a visceral level, but it’s unlikely that it would have led to the downfall of the Islamic Republic and it very well have could have led to a conflict that would have distracted us from the far more important task of dealing with the Soviet Union. Moreover, by the time the hostages were released Iran and Iraq were locked in a conflict that would last ten years and drain the resources of both countries. Quite honestly, it was in our interests for that conflict to continue as long as possible, which is why we were covertly selling weapons to Saddam Hussein. Getting ourselves involved in that conflict directly would have been a mistake.

Don Surber and other bloggers seem to be accusing Koppel of attacking President Reagan, but quite honestly I don’t see it. His criticism of the arms-for-hostages deal is spot-on and largely correct. Negotiating with Iran was not bad in and of itself, selling them arms in exchange for freeing hostages was both a tactical and a strategic error. It sent messages to people who would do us harm that. even when we have a strong leader, the United States will still ultimately back down. That’s one of the reasons Saddam Hussein tried the “human shield” tactic in the face of an impending U.S. attack in 1991. Thankfully, President Bush didn’t fall for that one.

Leaving the Reagan criticism aside, though, I think Koppel’s overall point is largely correct. Thirty years after the hostages came home, we still haven’t figured out how to deal with Iran.