Time on Hillary’s Side? Or Obama’s?

Two reports highlighted at memeorandum give opposite views on what impact the six week lull between the Mississippi and Pennsylvania primaries will have on the Democratic race. ABC’s Rich Klein argues that it will benefit Hillary Clinton in a piece headlined “Time on Her Side: Obama Maintains Lead, but Clinton Might Have the Edge.”

“When a team comes from far behind to tie it, that team usually comes back and does well,” said Chris Lehane, a Democratic strategist with close ties to the Clinton campaign. “This period is going to cause people to really think through who is best able to match up with John McCain.”

Obama has drawn considerable momentum in the race by winning caucuses and primaries.

His victory in Saturday’s Wyoming caucus, coupled with another win in Mississippi, mean he’s on track to reclaim most or all of the delegates he lost with Clinton’s resounding victories in the far larger states of Ohio and Texas last week. [Editor’s note: Obama won Texas, if the delegate count is what matters.]

But Clinton’s campaign has proved more adept at seizing control of the race when no one is voting [emphasis added].

Just in the past few weeks, Clinton has kept pressure on Obama with a stinging TV ad suggesting he’s unprepared to serve as commander in chief; left him on the defensive over NAFTA and controversial comments made by a high-level foreign-policy adviser; and made headlines by suggesting publicly that Obama could be considering as her running mate.

The lull in the voting action is likely to include several debates in Pennsylvania, a format in which Clinton has typically excelled.

It will also allow the Clinton campaign to work to find a way for Florida and Michigan to have their votes count; both states favor Clinton demographically, and a solution that allows those state delegations to be seated at the convention is likely to cut into Obama’s delegate lead.

In “”Hillary’s Race against Time,” though, Camile Paglia argues that the more we see Obama, the more we’ll like him and vice-versa for Clinton.

Obama is certainly a darling of youth, the wave of the future. If he has failed thus far to reach working-class whites, it’s because he’s a dewy and somewhat reserved newcomer on the national stage. Ruggedly stumping Hillary, warts and all, is a known commodity. Obama’s effect has been heaviest on the information class — journalists, academics and white-collar professionals chained to computers and surfing the Web all day. He’s been a flickering media phenomenon for everyone except attendees at his electrifying mass rallies. What’s militated against Obama is simply time. The more he is known, the bigger his gains.

Hillary, her shrill voice much improved and lowered through brutal overstrain, has certainly gained confidence and performance skill on the campaign trail, but I still don’t trust her. The arrogant, self-absorbed Clintons have shown their unscrupulous hand to all who have eyes to see. Yes, Hillary may know the labyrinthine flow chart of the Washington bureaucracy, but her peripheral experiences as a gallivanting first lady scarcely qualify her to be commander in chief. On the contrary, her constant resort to schmaltzy videos and cheap entertainment riffs (“The Sopranos,” “Saturday Night Live”) has been depressingly unpresidential. Is this how she would govern? All that canned “softening” of Hillary’s image would have been unnecessary had she had greater personal resources to begin with. Her cutesy campaign has set a bad precedent for future women candidates, who should stand on their own as proponents of public policy.

Would I want Hillary answering the red phone in the middle of the night? No, bloody not. The White House first responder should be a person of steady, consistent character and mood — which describes Obama more than Hillary. And that scare ad was produced with amazing ineptitude. If it’s 3 a.m., why is the male-seeming mother fully dressed as she comes in to check on her sleeping children? Is she a bar crawler or insomniac? An obsessive-compulsive housecleaner, like Joan Crawford in “Mommie Dearest”? And why is Hillary sitting at her desk in full drag and jewelry at that ungodly hour? A president should not be a monomaniac incapable of rest and perched on guard all night like Poe’s baleful raven. People at the top need a relaxed perspective, which gives judgment and balance. Workaholism is an introspection-killing disease, the anxious disability of tunnel-vision middle managers.

While I’m not unsympathetic to Paglia’s view of Clinton, my sense is that Klein is closer to the mark. Hillary Clinton has been in the national spotlight since early 1992; people have already rendered their judgments on her temperament and personality.

Time is generally to the advantage of the one with the most ground to make up. While that means Obama has time to close the gap in Pennsylvania, it also gives Clinton time to batter Obama and make her case to the superdelegates, who will ultimately decide the contest.

Further, Obama has managed to stay largely unsullied for months, maintaining his position as the candidate of optimistic, hopeful, change. There are six weeks now of news reports to be written with relatively little news on the schedule. The number of column inches and minutes of air time remain constant. It won’t be difficult at all for Clinton’s surrogates to plant story ideas.

None of this is to say that Clinton will necessarily win. Indeed, Obama remains the favorite. There is a genuine desire for a new kind of politics and Clinton is anything but that. But she’d surely rather have six weeks than six days to stage her comeback. 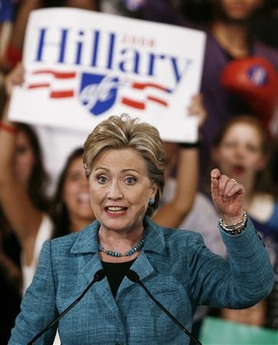