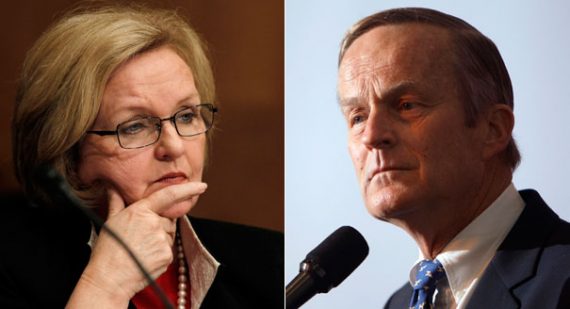 A new poll out of Missouri from Public Policy Polling shows a much tighter race than many had thought we’d see in the wake of Todd Akin’s “legitimate rape” comments last week and his abandonment by pretty much the entire Republican and conservative establishment:

PPP’s newest poll of the Missouri Senate race finds that Todd Akin is weathering the storm and the contest remains a toss up. Claire McCaskill leads 45-44, just a small change from our poll last week which found Akin ahead by a 44-43 margin.

-53% of voters say that they accept Akin’s apology for his comments last week to 40% who do not. For most Missourians Akin’s words weren’t a permanent deal breaker. Although Democrats are not ready to forgive him, 77% of Republicans say they accept his apology to only 18% who do not.

-Only 37% of voters now say they think Akin should withdraw from the race to 54% who believe he should not. There’s a bipartisan consensus that he should stay in- 57% of independents, 53% of Democrats, and 52% of Republicans think he should continue running. There’s clearly a disconnect on Akin’s candidacy between GOP leaders in Washington DC and actual GOP voters back in Missouri.

-Akin’s favorability numbers are still poor with 33% of voters rating him favorably to 56% with a negative opinion. But that’s up a net 11 points from our survey last Monday when it came down at 24/58. A lot of voters have already moved on from being disgusted with him over his comments.

One thing this whole episode hasn’t done is soften voters’ opinions of Claire McCaskill. Only 40% of voters approve of the job she’s doing to 55% who disapprove. Even though 32% of Republicans have an unfavorable opinion of Akin, only 11% of them actually say that they’re going to vote for McCaskill. For many voters that don’t care for Akin, he is still seen as the lesser of two evils. McCaskill has at least pulled into the lead with independent voters this round at 45-38.

This poll comes on the heels of another poll that showed Akin leading McCaskill by three points. However, since that poll was commissioned by the Family Research Council, many people discounted it. As far as the PPP poll goes, it’s worth noting that Akin does underperform Mitt Romney in the state and, as noted his unfavorable numbers remain fairly high. Additionally, there are those polls from Rasmussen and Mason-Dixon that had McCaskill with a far more comfortable lead in the Show Me State. So, it’s hard to tell what’s going on here. It’s possible that PPP has a bad sample here, but then it’s also possible that other polling organizations aren’t looking at the state correctly and PPP is the one that’s right. One thing that this does seem to indicate, though, is that the antipathy in Missouri for Claire McCaskill is still fairly strong and that this controversy hasn’t really helped her make up that lost ground. The best evidence of that would be the fact that even in the Rasmussen and Mason-Dixon polls, McCaskill is polling below 50% in one and just at 50% in the other, and that’s with only about 10 weeks to go before Election Day. What that suggests is that Senator McCaskill is going to have to do more than just spend the time between now and Election Day attacking Todd Akin.

The exit question that all of this leads to is whether Republican groups might walk back their decision t pull money out of Akin’s campaign if it appears that the race is as close as PPP seems to suggest that it is. Earlier this week, Reince Preibus reiterated that no RNC money would be going to the state on Akin’s behalf and the general sentiment toward Akin among delegates seems to be an overwhelming desire that he drop out. However, if it turns out that the race in Missouri is still competitive would the GOP really ignore it and risk possibly losing the fight for control of the Senate?