Toensing and diGenova will not Join Trump Legal Team

So, not conspiracy theory lawyer after all.

Via the NYT:  Trump Won’t Hire 2 Lawyers Whose Appointments Were Announced Days Ago

President Trump has decided not to hire two lawyers who were announced last week as new additions to his legal team, leaving him with a shrinking stable of lawyers as the investigation by the special counsel, Robert S. Mueller III, enters an intense phase.

“The president is disappointed that conflicts prevent Joe diGenova and Victoria Toensing from joining the president’s special counsel legal team,” Mr. Trump’s personal lawyer, Jay Sekulow, said in a statement on Sunday morning. “However, those conflicts do not prevent them from assisting the president in other legal matters. The president looks forward to working with them.”

Meanwhile, John Dowd’s exit from the team remains in place, so Trump’s legal team remains smaller than it was, at least for the moment. 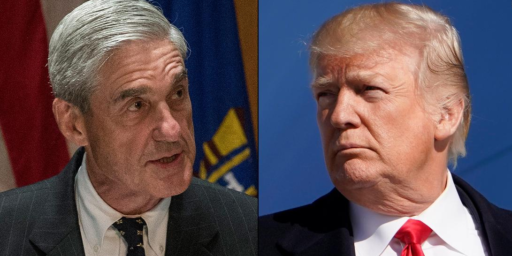 Donald Trump’s Own Lawyers Have No Confidence In Him