A new head for the DNC at a time when the Democratic Party finds itself reeling and eager to take on Donald Trump. 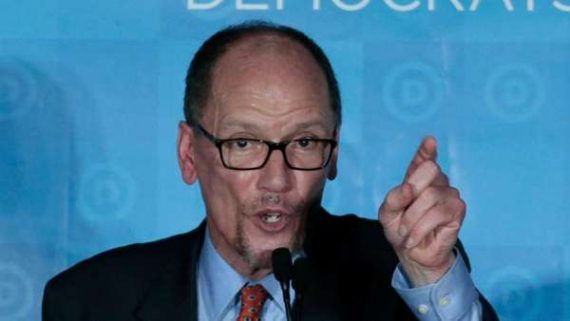 In an election battle that became quite contentious in the wake of the shock of Hillary Clinton’s loss in the General Election, former Obama Labor Secretary Tom Perez was elected Chairman of the Democratic National Committee yesterday:

ATLANTA — Former Labor Secretary Thomas E. Perez was elected chairman of the Democratic National Committee on Saturday, narrowly defeating Representative Keith Ellison of Minnesota to take the helm of a still-divided party stunned by President Trump’s victory but hopeful that it can ride the backlash against his presidency to revival.

The balloting, which carried a measure of suspense not seen in the party in decades, revealed that Democrats have yet to heal the wounds from last year’s presidential primary campaign. Mr. Perez, buoyed by activists most loyal to former President Barack Obama and Hillary Clinton, won with 235 votes out of 435 cast on the second ballot.

Mr. Ellison, who was lifted primarily by the liberal enthusiasts of Senator Bernie Sanders of Vermont, captured the remaining 200 votes. But that was only after he had pushed the voting to a second round after Mr. Perez fell a single vote short of winning on the first ballot.

Taking the microphone from Mr. Perez, Mr. Ellison pleaded with his fervent backers: “We don’t have the luxury to walk out of this room divided.”

In his victory speech, Mr. Perez played down what he called “the robust discussions in the Democratic Party.” “We’re all going to continue to be united in our values,” he said, calling the party’s “big tent” an asset.

Mr. Perez, 55, the son of Dominican immigrants, is the first Latino chairman of the Democratic Party. He was reared in Buffalo and has held a series of state and federal government jobs, most recently as Mr. Obama’s labor secretary.

Despite his limited experience in electoral politics, his calls for rebuilding the grass-roots and fostering a party that “makes house calls again” appealed to the party insiders who have watched as the House, the Senate and finally the presidency slipped away.

Addressing reporters with Mr. Ellison after the election, Mr. Perez vowed to shift the committee from its overriding focus on presidential politics.

Neither of the two, by this point wearing each other’s campaign buttons, laid out Mr. Ellison’s role at the party, but they intimated that they had discussed joining forces before the vote. Directly appealing to his disappointed supporters, Mr. Ellison said, “If they trust me, they need to come on and trust Tom Perez as well.”

Mr. Ellison, who said he would not quit his House seat for the deputy chairman position, added, “The very fate of our nation, I believe, is in the balance right now.”

Mr. Trump used a lighter tone in offering up his response to the Democratic National Committee’s election. “Congratulations to Thomas Perez, who has just been named Chairman of the DNC,” the president wrote on Twitter. “I could not be happier for him, or for the Republican Party!”

Mr. Perez’s victory was the culmination of a more than three-month campaign that began when Democrats were still shellshocked over losing the presidential race. All of the major candidates argued against any turn toward moderation, and they shared the same strategic vision for reviving a national committee and state parties that had withered under Mr. Obama.

What was expected to be a robust debate over the way forward for a party shut out of power across much of the country was soon diminished by the larger, more immediate matter of Mr. Trump’s almost daily provocations and the raging backlash to his hard-line agenda.

Entering the race immediately after Mr. Trump’s win, Mr. Ellison, a prominent surrogate for Mr. Sanders in the presidential primary race, quickly won support from him and other leading liberals. Allies of Mr. Obama, Mrs. Clinton and other establishment-aligned Democrats soon began casting about for an alternative. In December, Mr. Perez entered the fray, quickly winning praise from Mr. Obama and endorsements from a number of governors.

While voting members of the party are more closely linked to the establishment wing, Mr. Ellison kept the race close by consolidating liberals and picking up support from mainstream Democrats such as the Senate minority leader, Chuck Schumer of New York.

Mr. Perez, though, got a lift in the final days of the contest when the South Carolina Democratic Party chairman, Jaime Harrison, withdrew from the race and threw his support to him. Mr. Perez’s allies said they had enough votes to win on the first ballot, but a single committee member somehow missed the vote.

And Mr. Ellison’s effort was hurt when one of his aides sent a group text message to the committee members claiming that Mayor Pete Buttigieg of South Bend, Ind., who withdrew from the race before the first vote, had endorsed him, only to send a subsequent message with “CORRECTION” in capital letters acknowledging that Mr. Buttigieg had not.

Perez’s victory comes in the wake of the Chairmanship of Florida Congresswoman Debbie Wasserman-Schultz who, while largely supported by the members, of the DNC itself, often proved to be a controversial head of the party toward the end of her tenure. For one thing, many questioned whether it was a good idea for an elected official to serve a dual role as both a Member of Congress and as a supposedly neutral head of her party. At many points during her tenure, that conflict seemed apparent when it became unclear whether she was speaking and taking positions as a Member of Congress or as DNC Chairwoman, and whether she was acting in the interests of the party or in her own self-interest. It wasn’t until the 2016 Presidential campaign began, though, that Wasserman-Schultz’s role as head of the DNC truly became controversial. While she remained officially neutral during the primary, it was well-known that she was close to, and a strong supporter of, Hillary Clinton, a fact that dogged her throughout the primary. From the start, it was alleged that the DNC under Wasserman-Schultz’s leadership had put its thumb on the scale for Clinton in the way it arranged the primaries, and most prominently in the debate schedule, which placed most debates on Saturday or Sunday nights at times when fewer people would be likely to watch. Other incidents, such as a dispute between the DNC and the Bernie Sanders campaign regarding access to party data that was supposed to be shared equally with all candidates, led to the perception among Sanders supporters that Wasserman-Schultz was actively trying to undercut the Sanders campaign. All of this came to a head just prior to the Democratic National Convention when leaked emails appeared to confirm many of the allegations of favoritism that Sanders supporters were making, thus generating such intense blowback that Wasserman-Schultz was forced to step down as Chairwoman just as the convention was set to gavel to a start.

All of this tension, along with lingering resentments from Sanders supporters, played into the race for Chairman that has unfolded since November. Minnesota Congressman Keith Ellison, one of the handful of Muslim-Americans in Congress today, was one of the first candidates in the race and supporters of Bernie Sanders quickly rallied around him. In what many saw as a slight slap at Wasserman-Schultz, Ellison began his campaign by pledging he would resign his seat in Congress if he won the DNC election so that he could concentrate on being Chairman as a full-time job. Despite the fact that his politics are arguably just as “progressive” as Ellison’s, when Perez entered the race he was rather immediately tagged as the candidate of the establishment and the battle between Perez and Ellison turned into a proxy for, and a continuation of, the battle between Clinton and Sanders. Additionally, Perez was seen as a safer choice by many Democrats due to the fact that there were many concerns about Ellison and previous statements about Israel and the conflict with the Palestinian issue. Add into this the fact that, notwithstanding the fact that Sanders supporters continue to be a loud voice inside the Democratic Party, the DNC is still dominated by “establishment” figures who backed Clinton in the primary and it’s not surprising that Perez ended up winning.

Perez has an unenviable job before him, of course. The Democratic Party was hit hard by the election outcomes in 2010 and 2014, and even harder by the outcome in 2016 given the fact that all indications before it started were that the party seemed likely to hold on to the White House and possibly also gain control of the Senate in the process. Instead, they lost an election they thought they had in the bag to a particularly egregious candidate, only gained one seat in the Senate and a handful of seats in the House, and failed to do much of anything to reverse the trend in the states that started in 2010 which has seen the Republican Party become dominant in state legislatures and Governor’s offices. Additionally, instead of a Republican Party in disarray, it is the Democratic Party that finds itself in a battle between its core base and establishment on one side and a still relatively small but vocal group of progressives who would pull the party even further to the left. This is a battle that Perez must now manage while at the same time leading the party into two important Gubernatorial elections in Virginia and New Jersey this year and the midterms in 2018. As things stand, it also looks to be a battle that will play a central role in the party all the way to 2020 and the fight for the chance to take on Donald Trump again. How it all plays out remains far from clear.