Should transparency stop at the water's edge? 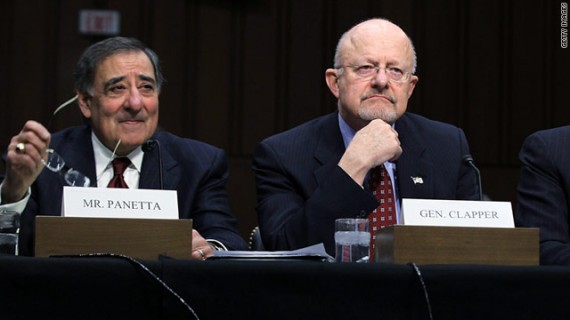 In an article for CNN titled “Is it OK for spy agency chiefs to tell the truth?” former CIA and NSA director Michael Hayden proclaims, “Jim Clapper was right all along!”

Remember the stir that the director of national intelligence caused four short weeks ago when he offered this analysis on the situation in Libya: “I just think from a standpoint of attrition, that over time, I mean — this is kind of a stalemate back and forth, but I think over the longer term that the regime will prevail.”

Within hours, National Security Adviser Tom Donilon was on a conference call with reporters repudiating Clapper’s analysis for not being informative and charging that it was neither “dynamic” nor “multidimensional.”

It looks as if the DNI’s statement had put the Obama administration on a spot that it was not yet prepared to be on. But a week later, NATO airpower was called on to stop the Gadhafi regime from overrunning the rebel stronghold of Benghazi and snuffing out the revolt in its birthplace as it looked like the regime was about to, well, “prevail.”

The episode is instructive. First of all, no chief of any other intelligence service on the planet would have been asked that kind of question in open parliamentary session. It is incredibly difficult for the DNI to comment publicly on such a situation, knowing that his comments will actually affect the situation. But such is the American system of transparency and oversight. We often play things out in public that others keep private.

Second, the reflexive White House repudiation of the analysis, by what statute says is the president’s senior intelligence adviser, surely sent a shock wave through the American intelligence community.

Most analysts would have agreed with Clapper and been disheartened to see how their policy masters responded to these “unpleasant facts.” They would have also been discomfited by the DNI’s spokesperson later in the day seeming to align the DNI with the White House, commenting that Clapper’s testimony was a “snapshot” of a “very fluid” situation with “many factors (that) will come into play over time.”

Hayden uses the rest of his essay to argue that it’s important that we use honest, clear language to describe things rather than trying to obscure with euphemisms. He’s particularly annoyed by the Obama administration’s reluctance to call the operation in Libya a “war” and acts of terrorism committed by some actors “terrorism.” He’s right.

More interesting, though, is his point that “no chief of any other intelligence service on the planet would have been asked that kind of question in open parliamentary session.” While the American practice is ostensibly aimed at “transparency,” it’s more often these days used for the purpose of partisan grandstanding. If politics ever ended at the water’s edge, they certainly don’t these days. In that environment, it undermines American policy to have Congress grill military and intelligence community leaders on ongoing operations in open session.

Clapper’s analysis that Gaddafi was likely to prevail absent outside intervention on part of the rebels was obvious to most of us–even those who were skeptical of intervention. But he’s not a pundit or an independent analyst; he’s the head of the American intelligence bureaucracy. Should his assessment of the survival prospects of a potential adversary–especially one who the president has already proclaimed “needs to go”–really be a matter of public record? Simply delivering that pronouncement changes the equation when it’s the DNI doing it.

Further, Clapper has the institutional interests of his agencies to safeguard. That tends to promote worst case analysis even in private. That pressure is magnified when speaking in a public forum.

If the aim of seeking his counsel is candor, so that Congress might best exercise its oversight, wouldn’t a closed door session with the Intelligence Committee be more useful?

Similarly, the periodic dog and pony show of having General David Petraeus testify on the progress of whatever war he happens to be leading at the moment is a pointless exercise. As the commander of an ongoing mission, putting the best spin on the prospects for success is practically in the job description. He can’t very well proclaim that there’s little chance of achieving meaningful victory in Afghanistan while ordering troops to risk their lives in its cause. So, he’s in the bizarre position of having to sell his mission to Congress and the public—effectively standing the roles on their head—because he’s being forced to testify in front of television cameras.

There’s probably a good reason why no other country does it this way.