The Turks’ concern about the recent House Foreign Affairs Committee vote on HR 106, a measure condemning the killing of Armenians in under the Ottoman in the early part of 20th century as genocde, continues:

ISTANBUL, Turkey – Turkey’s top general warned that ties with the U.S., already strained by attacks from rebels hiding in Iraq, will be irreversibly damaged if Congress passes a resolution that labels the World War I-era killings of Armenians a genocide.

Turkey, which is a major cargo hub for U.S. and allied military forces in Iraq and Afghanistan, has recalled its ambassador to Washington for consultations and warned that there might be a cut in the logistical support to the U.S. over the issue.

Gen. Yasar Buyukanit told daily Milliyet newspaper that a congressional committee’s approval of the measure had already harmed ties between the two countries.

“If this resolution passed in the committee passes the House as well, our military ties with the U.S. will never be the same again,” Buyukanit was quoted as saying by Milliyet.

“I’m the military chief, I deal with security issues. I’m not a politician,” Buyukanit was quoted as saying by Milliyet. “In this regard, the U.S. shot its own foot.”

I’ve already expressed myself on this issue and, while I don’t doubt that the Turks under the Ottoman killed lots of Armenians I wish that all sides would open their archives on this so we could get to the bottom of the matter. I am not much of one for symbolic action and I don’t see that passing this resolution would do any practical good for the United States (or Turkey, for that matter). I do wonder why everybody—Turks, Armenian-Americans, and the House Foreign Affairs Committee—are behaving as they are.

Armenian-American groups have lobbied Congress vigorously on this issue for many years. I don’t have specific information but I suspect they’ve redoubled their efforts since the 2006 election turned the control of both houses of Congress over to the Democrats. The efforts appear to have borne fruit. The principle sponsors of the bill are from Michigan and New Jersey—both electorally important to Democrats.

Why are the Turks so sensitive? I can only speculate but I suspect there are lots of reasons. The secularists who have governed Turkey for the last nearly 90 years are under increased pressure from Islamists. This topic probably provides fodder in some manner for this contest. This isn’t the only bone of contention between Turkey and the United States. Others include Turkey’s resistance to allowing the U. S. to invade from its soil in 2003 (also a product of the secularist-Islamist jockeying) and Kurdish separatists use of Iraqi Kurdistan as a base of operations for mounting attacks on Turkey.

Turkey continues to have an ethnic Armenian minority and I can only suspect that the Turkish government is concerned that rising separatist sentiments among Turkish Kurds will lead to similar ideas among Turkey’s other ethnic minorities.

BTW, Michael Van der Galien has posted frequently on this topic. The link is to a backgrounder from Michael on the Armenian genocide. Michael is engaged to be married to a Turkish girl and plans to move to Turkey when they’re married so the brouhaha over the House Committee vote and Turkish foreign relations, generally, are of some concern to him.

I’d intended to mention this in the body of the post but somehow it got away from me and Michael van der Galiën was kind enough to remind me of it in comments. One of the likely reasons for the Turks’ sensitivity in this matter is the chronology of the massacres which began in 1915 and continued until as late as 1923. This places them firmly during the period of the founding of the Turkish state and several of of the founders of that state have been implicated in the massacres by the Armenians, notably Mustafa Kemal Atatürk. Like every other state Turkey has a founding mythology and the concept of an Armenian genocide by the Turks conflicts with those myths. 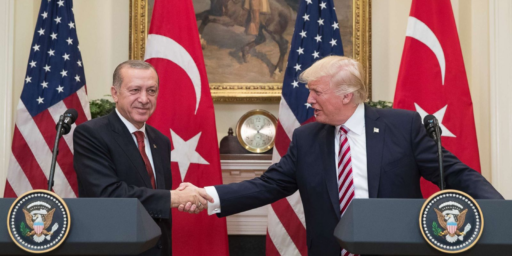