Twenty-five years ago today, the American space program came crashing to Earth in a horrible accident. 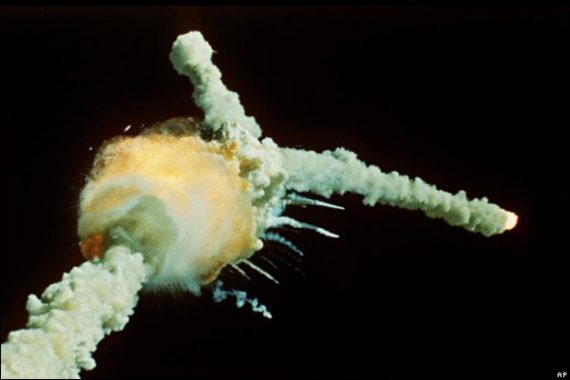 It seems like yesterday, but it was twenty-five years ago today that the Space Shuttle Challenger exploded 73 seconds after launch, killing all seven astronauts, including New Hampshire school teacher Christa McAuliffe, who would have been the first civilian to orbit the Earth.

When I first heard the news, I was walking out of a high school mid-term and eager to make my way home after the end of a half-day of school. When one of my classmates told me what happened, I didn’t believe it at first. The Space Shuttle ? Exploding ? Impossible. Then, I got out to my car and turned on the radio and the reality of the situation was made clear in seconds. It was gone, and so were the astronauts. I went straight home and spent the rest of the day watching television. This was in the day before cable news, so Americans were limited to what ABC, CBS, and NBC could give them and woke up the next morning to the tragedy played out on the front pages of America’s newspapers.

If you didn’t live through it, its hard to explain what it meant at the time. It was, in many ways, the mid-80s equivalent of September 11th — a national tragedy played out (mostly) live on television and a symbol of American might destroyed in the blink of an eye. Later investigation would reveal incompetence, bad design, and bad decision making on the part of NASA. There would be a commission appointed to investigate the tragedy headed by Neil Armstrong. Changes would be made and we would be told that things were different; only to find out 17 years later, almost to the day, that this was not the case. But on that day, all that mattered was the fact that the American space program’s near-flawless reputation had been forever changed and that seven astronauts were dead.

President Reagan was supposed to have given the State of the Union address on the night of January 28th, 1986. Instead, he spoke from the Oval Office:

The poem that Reagan quoted in the final lines of the address is called High Flight and was written by George Magee, a pilot in the Royal Canadian Air Force during World War II. During the days after the Challenger disaster it acheived a new notoriety as it seemed to communicate what had happened in the skies above Florida:

Oh! I have slipped the surly bonds of Earth
And danced the skies on laughter-silvered wings;
Sunward I’ve climbed and joined the tumbling mirth of sun-split clouds,-and done a hundred things
You have not dreamed of wheeled and soared and swung
High in the sunlit silence. Hov’ring there,
I’ve chased the shouting wind along, and flung
My eager craft through footless falls of air…
Up, up the long, delirious, burning blue
I’ve topped the wind-swept heights with easy grace
Where never lark, nor eer eagle flew-
And, while with silent lifting mind I’ve trod
The high, untrespassed sanctity of space,
Put out my hand and touched the face of God.

I remember watching the speech as well as I remember the other events of that day. As he did on so many other occasions, Reagan found the right words to communicate what we were all thinking that night.