Will Twitter impact the 2012 elections? The evidence seems thin that it will. 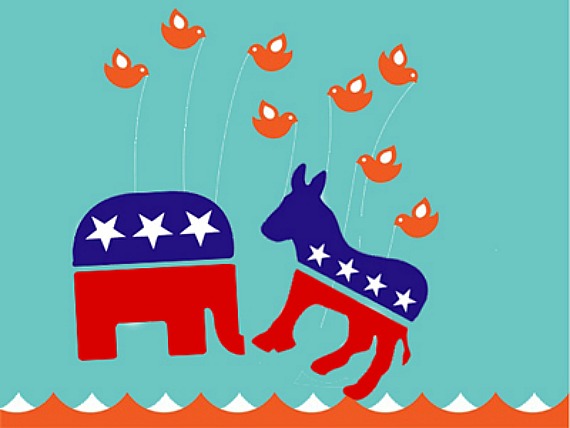 Spend any amount of time on Twitter and you’ll soon notice the extent to which it has become a microcosm of American politics. Utilizing various hashtags, conservatives and liberals throw barbs at each other in the apparent belief that they are somehow having an impact on the larger political world. Conservatives have become particularly effective at this, especially over the past several months as they’ve turned everything to the Hillary Rosen controversy to the ridiculous faux outrage over the fact that Barack Obama admitted to eating dog as a child in Indonesia into an opportunity to mock the President and Democrats, as well as they ability they have to quickly hijack various Twitter memes that the Obama campaign has thrown out there. At times it can admittedly all be amusing, especially if one considers it to be mostly just tongue-in-cheek and not really a serious political tool. I’ve come to notice recently, though, that many on the right seem to think that this “Twitter dominance” is somehow going to impact the election, and they’ve become quite proud of it.

John Hinderaker at Power Line puts it this way:

We are in the early stages of the 2012 campaign season, with a lot of battlespace preparation going on. In the skirmishing so far, one perhaps surprising media advantage has become clear: the right is clobbering the left on Twitter.

Maybe it’s because Twitter puts a premium on brevity and cleverness. I don’t know. But for some reason, it seems to be a natural medium for conservatives. We saw it when the Hilary Rosen interview (“Ann Romney never worked a day in her life”) prompted a Twitterstorm. We saw it again when #ObamaEatsDogs exploded, and when #Julia blew up in the White House’s face like an exploding cigar. Currently, the White House is promoting #AskMichelle, where loyal Democrats can go to ask the First Lady a question. Only nearly all of the questions have come from conservatives.

You almost feel sorry for the White House. They’re going to have to either do a better job of mobilizing their supporters on Twitter, or abandon the medium altogether.

Now, you may be wondering what posing fake questions for the First Lady is going to accomplish beyond showing your Twitter friends, most of whom already agree with you politically, how witty you can be. You wouldn’t be alone. My guess is that once a Twitter hashtag gets flooded with responses like these, the people who aren’t “in” on the joke end up ignoring it, or they just tune out the nonsense. I can’t honestly believe that anyone’s mind is going to be changed by the fact that a bunch of conservatives came up with a mildly amusing game to while away the afternoon with. More importantly, though, since the only people who can see what you write on Twitter are the people already following you, all things like this really end up being are an electronic version of preaching to the choir. Now perhaps that’s a good way of keeping morale up among activists, but the idea that it’s actually going to change anything is really somewhat silly when you think about it for a second.

Bryan Jacutout argues that it was the effective use of Twitter that allowed the Tea Party to reshape the GOP:

Conservatives have long been upset with the direction their party was headed. One need look no further than the last 5 Presidential candidates the party has put forward, each one more typical and predictable than the last. It tends to share more in common with a Royal line of succession, than a series of democratically elected candidates.

Every 4 years, the GOP and its party members knew who their next candidate would be before the primaries even began, and the people that made up the party’s base knew that there wasn’t much that could be done about it.

This past primary cycle changed that, and it forced this year’s “next-in-line” candidate into a primary fight that nearly cost him the nomination. A significant contributing factor of this was the centralized dissatisfaction with big government policies as represented by the Tea Party, and the use of Twitter to communicate this dissatisfaction to an increasingly broad audience

Did Twitter really have that big of an impact on the Republican nomination fight? Honestly, I’m skeptical. It’s true that social media has become a very effective method for political campaigns to reach out to, and stay in touch with, grassroots activists around the nation. The Obama 2008 campaign proved that to everyone’s satisfaction I think, and the technology has only become better and more pervasive in the past four years. At the same time, though, Twitter followers don’t vote, or go to the polls, or talk to their neighbors unless the campaign motivates them to, and they don’t make up for the bread-and-butter aspects of campaigning that every candidate must utilize if they’re going to win elections. Newt Gingrich, Rick Santorum, and Herman Cain all relied on  non-traditional, social media based, campaign techniques, and while they each had their own moment in the sun and rise in the polls, in the end they could not compete against the more traditional campaign being run by Mitt Romney. Clearly, even in the new world, the old ways still work and are still necessary. Finally, if  Jacutout wants to find a reason that the GOP race dragged out and Romney was denied the closing that we’d seen before, he needs to look no further than the primary calendar and the delegate allocation rules, both of which made the way the race ended up unfolding rather inevitable. If the old rules had been in place, all the Twitter hashtags in the world would not have kept Santorum or Gingrich alive much past February.

Ed Kilgore is far more skeptical of the actual impact of all this tweeting on politics:

Now maybe I’m just an old goat who doesn’t understand why Twitterwars will determine the configuration of forces in the 2012 campaign. I’m a reasonably active Twitter user, but mainly use it to (a) draw attention to blog posts, columns, and other longer content I’ve written, (b) follow other people’s longer content, and (c) occasionally track breaking news—real news that hasn’t been written up yet, not contrived crap like Hilaryrosengate. Sure, I may toss out a snarkly one-liner now and then, and have now and then used Twitter for live-blogging of events like candidate debates. I also realize that campaigns and other political organizations effectively use Twitter to organize communications or events. But truth be told, I can’t imagine that purely Twitter-centric snarkfests have any particular impact on media coverage of politics, much less actual public opinion.

I’m largely with Kilgore here. There are plenty of things that Twitter can be useful for in the political world, but it’s a huge stretch to say that it has any real impact on the race itself, or most importantly on the opinions of voters. Perhaps this is the year that changes, but so far there doesn’t seem to be any evidence of that, and a lot more evidence that the old-fashioned ways of winning elections still apply.