According to some new studies by crack economists, it's helpful to have a spouse bringing in some money if you happen to lose your job.

According to some new studies by crack economists, it’s helpful to have a spouse bringing in some money if you happen to lose your job.   Revolutionary, I know, but it’s science.

A recent briefing paper by Kristin Smith of the Carsey Institute of the University of New Hampshire documents a sharp uptick in historical trends. Wives now contribute 47 percent of family income in married-couple households where the wives are employed. 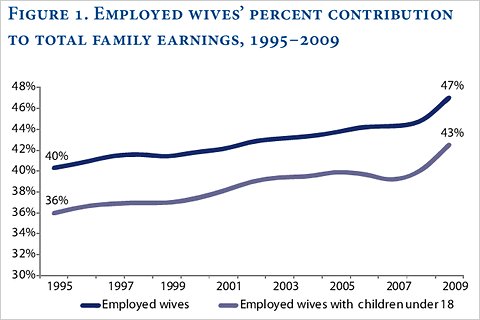 So, apparently, the wife’s percentage of overall earnings goes up when the husband starts making next to nothing? Tell me more!

Past estimates have suggested that the effect of a husband’s unemployment on his wife’s participation in paid employment — termed the added-worker effect — is small.

But in the past, unemployment was often temporary. Today, the average duration of unemployment has reached a record high.

Not surprisingly, we now see evidence of a significant added-worker effect – more specifically a husband-without-a-job effect.

Where do they come up with these catchy names? But, essentially, the value of a wife’s added income is greater the longer the husband isn’t bringing in a paycheck. I can see how that might be the case.

In a just-published article in the journal Family Relations, Professor Smith and her colleague and co-author Marybeth J. Mattingly offer a fascinating comparison of how wives responded when husbands moved out of paid employment between May of 2004 and May 2005 (a period of economic expansion) and between May 2008 and May 2009 (a period of recession).
Wives increased their hours of paid employment significantly more in the second period, helping explain why their relative contribution to family income increased. Declines in family wealth (such as the value of a home) probably intensified the effect of persistently high unemployment rates among men, pushing married women to accept jobs they might have refused in the earlier period.

So, stay-at-home spouses are more likely to seek work if their husband loses his job in a bad economy — and thus will be expected to be out of work longer — than in a good economy? Got it!

The spousal safety net didn’t help all couples, because not all wives were able to find employment.

Not overly surprising, this.

Also, it’s unlikely that the increase in wives’ earnings fully compensated for the decline in husbands’ earnings, because, as Professor Smith points out, women employed full-time year-round earn, on average, about 83 percent of what their male counterparts earn.

And, one imagines, even less if they’ve had a long period outside the workforce prior to rejoining it.