Two of the soldiers who wrote last month’s controversial NYT op-ed arguing that the war in Iraq was lost have been killed in a tragic accident. E&P’s Greg Mitchell has the sad details:

Sgt. Omar Mora and Sgt. Yance T. Gray died Monday in a vehicle accident in western Baghdad, two of seven U.S. troops killed in the incident which was reported just as Gen. David Petraeus was about to report to Congress on progress in the “surge.” The names have just been released.

The controversial Times column on Aug. 19 was called “The War As We Saw It,” and expressed skepticism about American gains in Iraq. “To believe that Americans, with an occupying force that long ago outlived its reluctant welcome, can win over a recalcitrant local population and win this counterinsurgency is far-fetched,” the group wrote. It closed: “We need not talk about our morale. As committed soldiers, we will see this mission through.”

Mora, 28, hailed from Texas City, Texas, and was a native of Ecuador, who had just become a U.S. citizen. He was due to leave Iraq in November and leaves behind a wife and daughter. Gray, 26, had lived in Ismay, Montana, and is also survived by a wife and infant daughter. 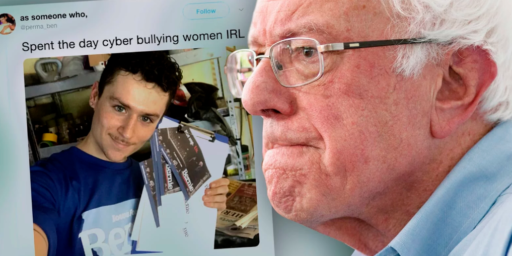 Should We Blame Bernie for His Trolls?