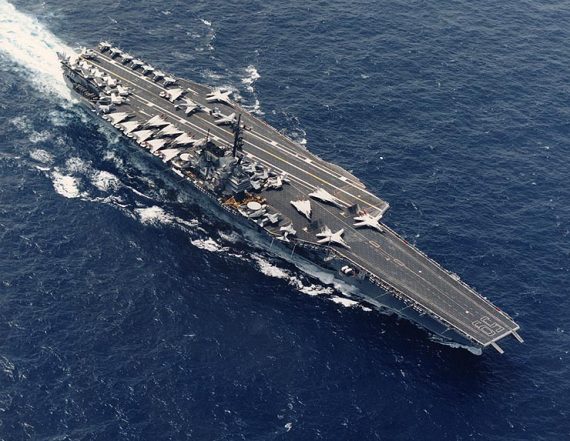 The USS Forrestal, the first “supercarrier” in the U.S. fleet, launched in 1954 and one of the many assets used during the Vietnam War, has been sold for a penny some 20 years after being decommissioned:

The U.S. Navy turned over the 1,067-foot behemoth to a Texas company, All Star Metals, to be dismantled, scrapped and recycled, giving the firm the sum of one penny for its trouble, Navy officials announced. It’s an inauspicious fate for a ship with a colorful — and tragic — history. It’s perhaps best known for a 1967 incident in which stray voltage triggered an accidental explosion that struck a plane on the flight deck whose cockpit was occupied by a young John McCain. A chain reaction of blasts and fires ultimately killed 134 men and injured more than 300.

But its rich past and nearly four decades of service are not enough to spare it. The Navy tried to donate the historic ship for use as a memorial or a museum, but no “viable applications” were received.

“It’s something that the Navy is caught between a rock and a hard place,” said Ken Killmeyer, historian for the USS Forrestal Association and a survivor of the 1967 incident. “They have to have these vessels no matter how big or small they are, and they use them as you would your car until they’re no longer financially viable. So, they decommission them.”

The company plans to tow the aircraft carrier from its current location at the Navy’s inactive ship facility in Philadelphia to its facility in Brownsville, Texas. All Star Metals gets the proceeds and a penny but now must pay for moving and dismantling the ship, according to a Navy press release.

Named for James Forrestal, the former Navy secretary and the first U.S. Secretary of Defense, the carrier was lauded as the “biggest ship ever built” by Popular Science, which detailed it in its August 1954 issue. More than 16,000 engineers, draftsmen and builders worked on the ship, which took an estimated $217 million — nearly $2 billion in today’s dollars — to build. Readers were amazed to learn that the ship featured enough air-conditioning equipment to cool New York City’s Empire State Building two-and-a-half times over. It launched on Dec. 11, 1954.

“Her 3,500 crewmen will use nearly twice as much water as the eight big boilers that feed her main turbines,” Popular Science reported. “To supply both needs, her water tanks must store nearly 400,000 gallons.”

As noted, though, the ship is perhaps best remembered for the near disaster that occurred on is flight deck some 46 year ago:

The July 29, 1967, incident occurred while the ship was in the Gulf of Tonkin during the Vietnam War. Stray voltage triggered a rocket to launch from an F-4 Phantom on the flight deck, ultimately striking an armed A-4 Skyhawk piloted by then-Lt. Cmdr. John S. McCain III, who would later spend five years as a POW, serve in the U.S. Senate and run for president. A chain reaction of fires and explosions ensued, causing a day-long fire aboard the ship’s deck, which was packed with planes. In addition to the deaths and injuries, 21 aircraft were damaged. The incident prompted changes within the Navy to damage control and disaster response training, as most of the sailors who were trained as firefighters were reportedly killed during the initial blast, forcing the remaining crew to improvise its rescue efforts.

After seven months of repairs, the ship later returned to sea for more than two decades before ultimately being decommissioned in 1993. It was stationed in Newport, R.I., until 2010, when it was moved to Philadelphia’s Naval Inactive Ship Maintenance Facility, where more than 20 decommissioned naval vessels are reportedly being stored for possible foreign sale transfer, donation or artificial reefing.

Those who served on the Forrestal are disappointed that it couldn’t be turned into a museum but, in all honest, it’s simply not practical for that to happen with every decommissioned ship out there. 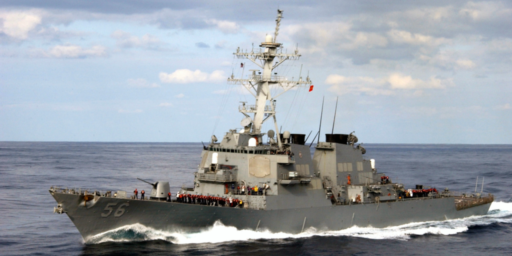