Monica Davey presents an anecdotal account of several modern-day Maxwell Klingers who have come up with creative ways to desert their posts during wartime. Of course, the fictional M*A*S*H* character was a draftee, not a volunteer.

The night before his Army unit was to meet to fly to Iraq, Pvt. Brandon Hughey, 19, simply left. He drove all night from Texas to Indiana, and on from there, with help from a Vietnam veteran he had met on the Internet, to disappear in Canada. In Georgia, Sgt. Kevin Benderman, 40, whose family ties to military service stretch back to the American Revolution, filed for conscientious-objector status and learned that he will face a court-martial in May for failing to report to his unit when it left for a second stint in Iraq. One by one, a trickle of soldiers and marines – some just back from duty in Iraq, others facing a trip there soon – are seeking ways out.

Soldiers, their advocates and lawyers who specialize in military law say they have watched a few service members try ever more unlikely and desperate routes: taking drugs in the hope that they will be kept home after positive urine tests, for example; or seeking psychological or medical reasons to be declared nondeployable, including last-minute pregnancies. Specialist Marquise J. Roberts is accused of asking a relative in Philadelphia to shoot him in the leg so he would not have to return to war. A bullet to the leg, Specialist Roberts, of Hinesville, Ga., told the police, seemed his best chance. “I was scared,” he said, according to a police report on the December shooting. “I didn’t want to go back to Iraq and leave my family. I felt that my chain of command didn’t care about the safety of the troops. I just know that I wasn’t going to make it back.”

Department of Defense officials say they have seen no increase in those counted as deserters since the war in Iraq began. Since October 2002, about 6,000 soldiers have abandoned their posts for at least 30 days and been counted as deserters. (A soldier who eventually returns to his unit is still counted as a deserter for the year.) The Marine Corps, which takes a snapshot of how many marines are missing at a given point in time, reported about 1,300 deserters in December, some of whom disappeared last year and others years earlier. The figures, Pentagon officials said, suggest that the deserter ranks have actually shrunk since the years just before Sept. 11, 2001. Of course, many things have changed since then, including the seriousness of deserting during a time of war.

Many of the tactics also defy simple categories like official desertion. “There are a lot of people, many more than normal, who are trying to get out now,” said Sgt. First Class Tom Ogden, just before he left for a second trip to Iraq with his Army aviation unit from Fort Carson, Colo. He said he had seen fellow soldiers in recent months who seemed intent on failing drug tests because they believed they would be held back if only their tests “came back hot,” while others claimed bad backs and necks, with the same hope. “I’ll tell you what,” Sergeant Ogden said, “they’re coming up with what they consider some creative ways to do it now.”

If, in fact, there are no more cases–or, indeed, fewer–now than before the war started, this is merely a case of a reporter sensationalizing some cases to create the appearance of a trend. Still, I find it amusing that Davey thinks these tactics are other than desertion. 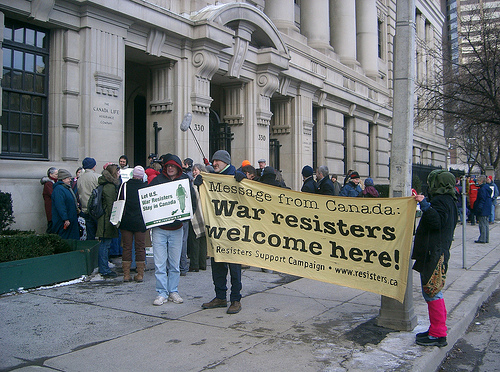