If pro-Bush speakers were indeed treated differently from anti-Bush ones, that would certainly be unconstitutional, whether this was done on the streets or on USF property. But even if all protesters were equally excluded, that too would probably be a First Amendment violation. While the government may sometimes impose bubble zones for various reasons, including security, requiring that protesters be 1/2 mile away seems to me quite overbroad for that purpose. Other requirements, such as a smaller bubble zone, or a limit on the number of people who can be present at the rally, might well be permissible. But a total exclusion from such a wide zone is unconstitutional. For a related, though obviously not identical, case, see United States v. Grace (1983), which struck down an ordinance that prohibited protests on the sidewalks outside the U.S. Supreme Court.

[I]t seems worth pointing out that this is wrong, even if a legal justification can be ginned-up somewhere. The purpose, pretty clearly, is to make it harder for Bush opponents to piggy-back onto the inevitable free media coverage that follows in the wake of any presidential speech.

This is a longstanding practice. The same thing was happening at Bush 41 campaign stops in 1992. People weren’t allowed to carry anti-Bush or pro-Clinton signs in. I never attended a Clinton rally, but suspect they acted in a similar manner.

What I don’t know is whether this is the Secret Service acting on its own initiative–figuring that these people are inherently more dangerous than pro-current president folks–or if it’s something the campaign is tasking the Secret Service to do. Either way, it’s bad policy.

Among the more insightful comments comes from a rather unlikely source:

Redner, a strip club owner, said he understood that the Secret Service must do its job, “But if someone wanted to kill the president, I think I’d go with a sign saying ‘I love the president.'” 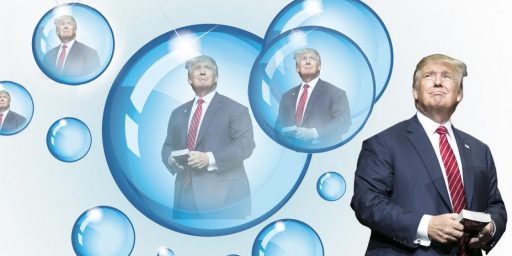