At least one person wonders why the US Army honors Confederate generals. 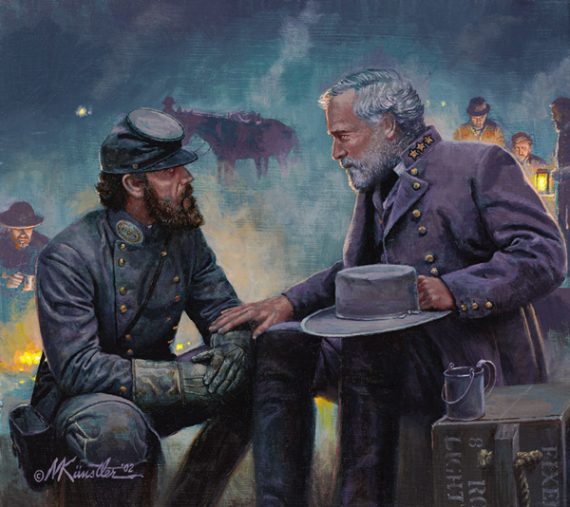 At least one person wonders why the US Army honors Confederate generals.

The U.S. Army War College, which molds future field generals, has begun discussing whether it should remove its portraits of Confederate generals — including those of Robert E. Lee and Thomas “Stonewall” Jackson.

Nestled in rural Pennsylvania on the 500-acre Carlisle Barracks, the war college is conducting an inventory of all its paintings and photographs with an eye for rehanging them in historical themes to tell a particular Army story.During the inventory, an unidentified official — not the commandant, Maj. Gen. Anthony A. Cucolo III — asked the administration why the college honors two generals who fought against the United States, college spokeswoman Carol Kerr said.

“I do know at least one person has questioned why we would honor individuals who were enemies of the United States Army,” Ms. Kerr said. “There will be a dialogue when we develop the idea of what do we want the hallway to represent.”

She said one faculty member took down the portraits of Lee and Jackson and put them on the floor as part of the inventory process. That gave rise to rumors that the paintings had been removed.

“This person was struck by the fact we have quite a few Confederate images,” she said, adding that the portraits were rehung on a third-floor hallway. “[Lee] was certainly not good for the nation. This is the guy we faced on the battlefield whose entire purpose in life was to destroy the nation as it was then conceived. … This is all part of an informed discussion.”

It is the kind of historical cleansing that could spark an Army-wide debate: Lee’s portrait adorns the walls of other military installations and government buildings.

Let’s stipulate up front that this is thinly-sourced linkbait. As best I can glean from the story, some unknown person asked a question and the Army War College may or may not be doing anything to answer it; from here, the author conjectures that the debate might spread. It’s pretty much a non-story.

The reason why I even clicked on it from the Defense News daily roundup is that I was amused by the notion that there’s any controversy at all about the paintings of Lee and Jackson when the Army has forts named after both men. Fort Lee, located “alongside the Tri-Cities of Virginia – Petersburg, Colonial Heights and Hopewell – as well as the counties of Chesterfield, Dinwiddie and Prince George” is home to  to the Combined Arms Support Command along with the Army Logistics University, the U.S. Army Ordnance School, the U.S. Army Quartermaster School and the U.S. Army Transportation School. [Fort Jackson, near Columbia, South Carolina, is “the U.S. Army’s main production center for Basic Combat Training, trains 50 percent of the Army’s Basic Combat Training load and 60 percent of the women entering the Army each year” as well as “home to the U.S. Army Soldier Support Institute, the Armed Forces Army Chaplaincy Center and School and the National Center for Credibility Assessment (formerly the Department of Defense Polygraph Institute). It also is home to the Army’s Drill Sergeant School, which trains all active and Reserve instructors.”]* That’s to say nothing of Fort Bragg and Fort Hood, two of our largest maneuver bases.

Is it somewhat odd to have major bases named after men who led the army of a secessionist state against the forces of the United States Army. But the spirit of reconciliation after the war, with some notable exceptions, was to embrace the South and its heroes as fellow countrymen. And Lee and Jackson in particular have been revered as outstanding examples of officership and gentlemanly virtue, at least within military circles, since time immemorial.

*UPDATE: A commentator correctly points out that Fort Jackson is named after Andrew, not “Stonewall,” Jackson. The point, however, remains: the Army has several major bases named after Confederate generals.