President Bush and German Chancellor Gerhard Schroeder on Friday set aside their differences over Iraq, with the U.S. president proclaiming “relations are good” after a long period of bitterness between the two leaders.

“We have differences — in the past,” Bush said as he and Schroeder sat side-by-side in the Oval Office, both men relaxed and smiling and frequently leaning in toward each other as they spoke. “But there’s nothing wrong with friends having differences and we have both committed to put the differences behind us and move forward.”

Likewise, Schroeder declared his first White House visit in two years a success. The two had been at odds over the German leader’s fierce opposition to the Iraq war.

“We talked not about the past,” Schroeder said. “We very much agreed that we have to talk about the present and the future now.”

The thaw in relations began last year, as Bush and Schroeder met twice, at the Group of Eight summit and at the U.N. General Assembly.

This doesn’t surprise me. As I’ve been saying all along, the roots of the US-German relationship are much deeper than the US-French one.

Amusingly, one would get very different impressions at a first glance depending on which of these photos was displaying when loading the WaPo main page: 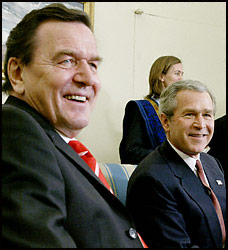 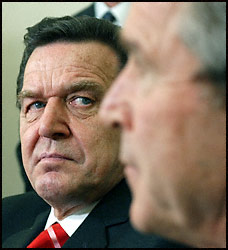