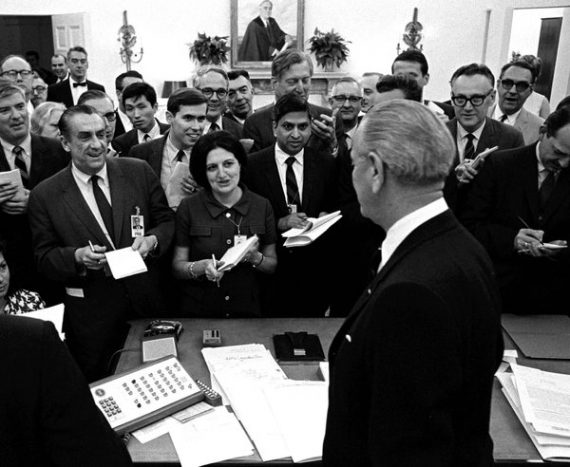 Helen Thomas, a White House reporter who broke the gender barrier in the White House Press Corps and covered every President from Eisenhower to Obama, has died at the age of 92:

WASHINGTON — Helen Thomas, whose bottomless curiosity and an unquenchable drive made her a prominent White House reporter at a time when men dominated the profession, died Saturday at her apartment in Washington. She was 92.

Her death, which came after a long illness, was announced by the Gridiron Club where Ms. Thomas had been a former president.

Ms. Thomas covered every president from John F. Kennedy to Barack Obama for United Press International and, later, Hearst Newspapers. Colleagues called her the unofficial dean of the White House press corps. Her blunt questions and sharp tone made her a familiar personality not only in the sometimes parochial universe inside the Beltway but also to nationwide television audiences.

Presidents grew to respect, even to like, Ms. Thomas for her forthrightness and energy, which sustained her well after the age at which most people have settled into retirement. President Bill Clinton gave her a cake on Aug. 4, 1997, her 77th birthday.

But on June 7, 2010, Ms. Thomas announced her immediate retirement from Hearst amid an uproar over her assertion that Jews should “get the hell out of Palestine” and go back where they belonged, perhaps to Germany and Poland. Her remarks, made almost offhandedly days earlier at a White House event, set off a storm when a videotape was posted.

In her retirement announcement, Ms. Thomas, who would have turned 93 next month, said that she deeply regretted her remarks and that they did not reflect her “heartfelt belief” that peace would come to the Middle East only when all parties embraced “mutual respect and tolerance.” “May that day come soon,” she said.

Ms. Thomas’s career bridged two eras, beginning during World War II when people got their news mostly from radio, newspapers and movie newsreels, and extending into the era of 24-hour information on cable television and the Internet. She resigned from U.P.I. on May 16, 2000, a day after it was taken over by an organization with links to the Unification Church.

Weeks later, Ms. Thomas was hired by Hearst to write a twice-weekly column on national issues. She continued working until her retirement.

When Ms. Thomas got a job as a radio writer for United Press in 1943 (15 years before it merged with the International News Service to become U.P.I.), most female journalists wrote about social events and homemaking. The “real” journalists — the ones who covered war, crime and politics and congratulated one another over drinks at the press club — were men.

She worked her way into full-time reporting, and by the mid-1950s was covering federal agencies. She covered John F. Kennedy’s presidential campaign in 1960, and when he won, she became the first woman assigned to the White House full time by a news service.

Ms. Thomas was also the first woman to be elected as an officer of the White House Correspondents’ Association and the first to serve as its president. In 1975, she became the first woman elected to the Gridiron Club, which for 90 years had been a “men only” bastion of Washington journalists.

Ms. Thomas was known for her dawn-to-dark work hours, and she got her share of exclusives and near-exclusives. She was the only female print journalist to accompany President Richard M. Nixon on his breakthrough trip to China in 1972. In the Watergate era, she was a favorite late-night confidante of Martha Mitchell, the wife of John N. Mitchell, Mr. Nixon’s attorney general and campaign official.

Mrs. Mitchell told Ms. Thomas that responsibility for the “third-rate burglary” at the Democratic headquarters in the Watergate complex in Washington and the cover-up that followed it had gone far above the midlevel officials who were implicated early on.

People with a vested interest in discrediting Mrs. Mitchell hinted that she was emotionally unstable and that she drank too much. But volatile or not, she was right. Ms. Thomas called Mrs. Mitchell, who died in 1976, “one of the first victims, and perhaps the only heroine, of the Watergate tidal wave.”

On April 22, 1981, three weeks and two days after the attempt on President Ronald Reagan’s life, Ms. Thomas and a reporter for The Associated Press interviewed the president, who told them of the “paralyzing pain” he had felt when a bullet went into his chest and of the panic that had overcome him when he could not breathe.

For decades, as dean of the press corps, Thomas would be the first person called on to ask a question in a Presidential Press Conference, and the one to say “Thank you, Mr. President” when it was over. Those customs have mostly fallen by the wayside in recent years as there has been far more turnover in the press room, but her influence over the room lasted well into her tenure, as the interview she gave to Mediaite’s Tommy Christopher, which I’ve embedded below, shows. The end of her career, of course, will forever be marred by remarks that many deemed as anti-semitic, a characterization that seems to be sadly all to accurate even reading them again today. It was a sad way to end a career that had many noteworthy achievements.