A longtime backbencher from British Prime Minister Tony Blair’s Labour party defected to a rival party Tuesday, saying he timed his announcement to do maximum damage to Blair’s campaign. Brian Sedgemore, a maverick member of Parliament who has voted against Blair on a number of issues, joined the anti-war Liberal Democrats. “I urge everyone from the centre and left of British politics to give Blair a bloody nose at the election,” said Sedgemore, who’s been a Labour politician for 27 years.

My initial reaction was, “What a prick” and how despicable an act this was. It turns out to be rather a non-story, if one bothers to read several more paragraphs:

While the 68-year-old, left-leaning veteran isn’t running in this election, opposition groups have seized on his move as a chance to bring the war back into the spotlight.

Blair, during a campaign stop at a school on Tuesday, dismissed Sedgemore’s defection. “We’re having a debate about someone who’s not even standing as a candidate in the election rather than a debate about who is best for the education future of the country,” said Blair.

So, this is some disgruntled old coot who’s not even going to be in Parliament. Apparently, even though Blair’s Labour Party is way ahead in the polls, this story has captured the fancy of the press.

Prime Minister Tony Blair is riding out rivals’ attacks over Iraq to hold a big lead ahead of Britain’s May 5 election — but faced fresh fire on Tuesday from a party defector accusing him of “stomach-turning lies.” Two new polls showed Blair ahead by 10 and eight percentage points over the main opposition Conservatives: a gap that would comfortably hand him a third term. But Blair’s satisfaction at the polls will have been tempered by the embarrassing defection of a veteran left-winger from his Labour Party to the anti-war Liberal Democrats. Brian Sedgemore, a 68-year-old parliamentarian who has frequently voted against Blair, said Labour no longer represented liberal Britain and tore into his former boss over Iraq, anti-terrorism laws and handling of public services.

How, exactly, is a historic victory in the midst of a controversial war going to be “tempered” by the defection of a fringe backbencher who’s not even running for anything? 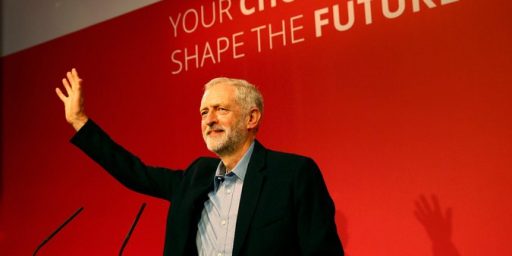