One of the dumber aspects of the current shutdown repeats itself. 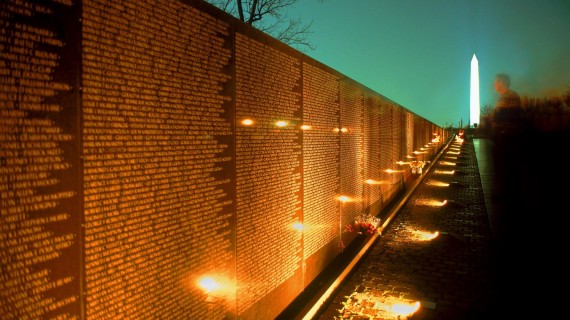 Someone needs to give the National Park Service a lesson in public relations:

The closure of D.C.’s war memorials continues to be a source of contention for tourists and law enforcement officials.

Like the hundreds of World War II veterans who came to National Mall to pay their respects this week, a group of Vietnam veterans found a barricade blocking the way to their memorial Friday. News4-s Mark Segraves said two U.S. Park Service Rangers manning the gate asked that the group respect the government’s shutdown but moved aside.

Segraves described the exchange as pleasant and respectful.

The veterans then moved the barricade and walked down to the wall to pay their respects. But a flood of tourists followed even though the memorial is closed to the general public.

“The consensus among the group of Vietnam veterans was we’re going to go anyway. We’ll go through the barricade,” North Carolina resident Reid Mendenhall said.

U.S. Park Police arrive to the scene, asked everyone to leave and put the barricade back into place.

Quite honestly, the closure of the open air memorials on the National Mall has been among the more bizarre post-shutdown moves that those in authority have taken. Ordinarily, these memorials are open all day and night every day of the year. To the extent that they are staffed, it is typically by National Park Service employees giving guided tours, not by Park Police (although there may be regular patrols of these memorials at night by officers as part of their regular rounds). The fact that these employees, who are essentially just tour guides aren’t around doesn’t really detract at all from the experience of visiting the memorials themselves. Those employees are generally not present after dark during normal times anyway, and yet no effort is ever made to restrict anyone from visiting those locations during the night. Indeed, seeing the Vietnam, Korea, and World War II Memorials at night when they are lit up is something that D.C. area residents and tourists commonly do when the weather permits. It’s also worth noting that the closure policy also applies to the Martin Luther King Jr. and FDR Memorials, both of which are also open air, and the Jefferson and Lincoln Memorials, both of which are also common locations for nocturnal walking tours of the Mall. Furthermore, it arguably cost the government more to erect the barricades and staff the memorials with Park Police than it would have to keep them open albeit without the tour guides.

Many on the right have accused the Obama Administration of doing things like closing these memorials in an effort to inflict the most pain in a public manner as part of an effort to put pressure on the GOP. Frankly, I have no doubt that there might be some truth in that, and that the choices of what has and hasn’t been closed may well have some political motivation behind it. However, it strikes me that some of these choices were made without considering of the public relations of doing so. The pictures of open air memorials that have always been open to the public being surrounded by barricades, or of World War II veterans having to essentially force their way in to the memorial to the war that they fought, doesn’t really make for very good television or photography.

Jazz Shaw sums it up nicely:

Yes… a lot of controversy is putting it mildly. The President can pick all the battles with congressional Republicans that he likes and probably not draw too much political fire from the middle. But if you wanted to conduct a poll of who is least likely to be blamed for anything in this country by the general public, veterans visiting war memorials would have to come in somewhere near the bottom of the list, behind possibly only puppies.

How many more of these stories can the administration sustain before the “no compromise, no negotiations” crowd realizes that they’re going to have to come to the table?

It may not matter if the GOP keeps shooting itself in the foot. However, there has to be a way of handling this matter that doesn’t look so heavy handed as kicking people out of an open-air memorial. Of course, it’s probable that the Park Service employees responsible for public relations are all furloughed. It would explain a alot.