Iraqi extremists in videotape aired Thursday by Al-Jazeera television showed what they said was a Polish woman hostage held in Iraq and demanded that Poland remove all its troops from Iraq. The group, which called itself the Abu Bakr al-Siddiq Fundamentalist Brigades, said the woman, who was not identified, works with U.S. troops in Iraq. They also demanded the release of all Iraqi female prisoners.

Interior Ministry spokesman Col. Adnan Abdul Rahman said the woman was a longtime Iraq resident with Iraqi citizenship and was believed to have been abducted Wednesday night from her home in Baghdad. Abdul Rahman did not release her name. A middle-aged woman with gray hair and dressed in a pink polka-dotted blouse sat in front of two masked gunmen, one of whom was pointing a pistol at her head. Her voice was not audible on the tape. Al-Jazeera said the woman called on Polish troops to leave the country and for U.S. and Iraqi authorities to release all female detainees from the Abu Ghraib prison. The announcer said she had been “working in Iraq for a long time.”

In Warsaw, a Polish Defense Ministry official said she apparently did not belong to any of the Polish military units. Polish television TVN24 reported that all Polish journalists in Iraq have been accounted for. 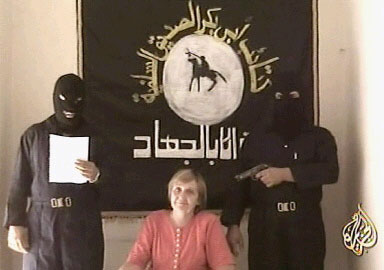 Arabic television station Al-Jazeera broadcast a video Thursday in which an armed group in Iraq said it had kidnapped a Polish woman. In Warsaw, private TVN television said the woman worked for the US military, but that it was unclear whether she was Polish or Polish-American.

The Polish army general staff in Warsaw said it was unable to confirm the kidnapping, while Defence Minister Jerzy Szmajdzinski rejected demands to withdraw Poland’s 2,500 troops from Iraq. “The Polish government is not in the business of meeting kidnappers’ demands,” Szmajdzinski told TVN. He said the woman could be an employee of a private contractor working for the US-led forces in Iraq, but that she was definitely not attached to the Polish contingent. The woman might be either Polish or a US citizen of Polish origin, the minister added.

This is the second female hostage with long ties to Iraq captured. Both have been captured by different groups, neither of which has followed the modus operandi of the previous kidnappers.

GoogleNews is tracking the story and will have updates as they’re available.

Abdul Rahman May be Released Soon