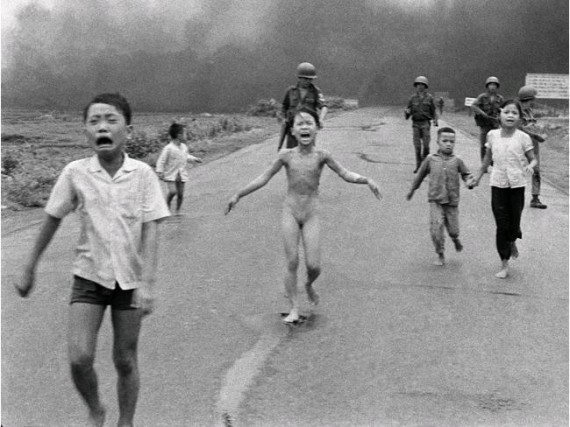 The nine year-old girl whose picture became an icon of all that was wrong with the Vietnam War is 50 years old now:

It was June 8, 1972, when Kim Phuc, now 49, saw the tails of yellow and purple smoke bombs curling around the Cao Dai temple where her family had sheltered for three days, as north and south Vietnamese forces fought for control of their village.

The ground rocked. The threads of her cotton clothes evaporated on contact. In shock, she sprinted down Highway 1 behind her older brother. Then, she lost consciousness.

Ut, the 21-year-old Vietnamese photographer, drove Phuc to asmall hospital. There, he was told the child was too far gone to help. But he flashed his press badge and demanded that doctors treat the girl and left assured that she would not be forgotten.

A couple of days after the image shocked the world, another journalist found out the little girl had somehow survived.

“I had no idea where I was or what happened to me,” Phuc said.

After multiple skin grafts and surgeries, Phuc was finally allowed to leave. For a while, life did go somewhat back to normal. She was accepted into medical school.

But all that ended once the new communist leaders realized the propaganda value of the “napalm girl” in the photo.

She was forced to quit college and was trotted out to meet foreign journalists. The visits were monitored and controlled, her words scripted.

Since then, and since the political environment in Vietnam has changed over recent years, Phuc has managed to build something of a normal life it seems, and additional medical treatments have alleviated much of the damage she suffered that day. Nonetheless, she’s likely always to be remembered for that one moment when she was nine years old.