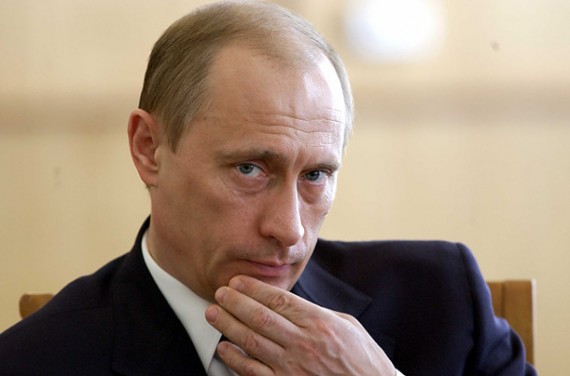 Just a little more than two years after leaving office due to a Constitutional term limit, former Russian President Vladimir Putin is hinting that he will make a bid to return to power when Russia holds elections in 2012:

“Naturally, I am already thinking about this issue with President Medvedev but have decided not to make much fuss about it, not to let ourselves be distracted by this problem,” Putin said.

His comments to French media were reported by Russian news agencies.

Putin, president from 2000 to 2008, anointed Medvedev as his successor when his second consecutive term — the maximum allowed under the constitution — expired. But Putin, the country’s most popular politician, can run for president again in 2012 and stay in power until 2024 if he wins two more terms, extended under new rules to six years.

Since 2008 the duo have been running the country in a tandem, with Medvedev overseeing foreign policy and Putin concentrating on domestic issues and measures to overcome Russia’s deepest economic crisis in a decade.

“What we will do in 2012 will depend on the results (of our work),” Putin said in an interview ahead of his visit to France, which starts Thursday. He said there was “no need to interfere in each other’s area of competence.”

None of this should come as a surprise, of course. As soon as Putin anointed his long-time acolyte Medvedev as his Presidential successor, and then Medvedev turned around and immediately named Putin has Prime Minister, it was fairly clear that Putin would remain, if not the de jure power in Russia, the de facto man in charge. In fact, the past two years have made fairly clear that Putin probably doesn’t need to reclaim to title of President in order to maintain the power that he has in Russia, although I’m sure it would be a nice feather in his cap and would allow him, as President, to once again become the public face of Russia to the world.

It’s a cynical move, no doubt, but this is Russia and, as Anne Applebaum noted during the last round of elections, the Russian public seems to have given up on democracy:

ROSTOV-ON-DON, Russia, March 2 — Voters slogged through cold rain and mud Sunday to cast their ballots at Precinct No. 1619 on Pushkin Street here, though many expressed feelings about the state of democracy that were even gloomier than the weather.

“Everyone understands that nothing can be changed,” said Mariana Poromaryova, who voted for President Vladimir Putin’s handpicked successor, Dmitry Medvedev. She said Russia was a democracy in name only, with leaders lacking accountability to the people they rule.

“The people live in one country, and the government in another,” she said.

Moments later, another voter stormed off after an exit pollster asked about her vote.

“I voted for anybody but United Russia!” she said, referring to the pro-Kremlin party that backs Medvedev. “Because they are all the biggest crooks!”

Many voters expressed anger or apathy about a campaign without real competition. In recent days, United Russia workers hit the streets with brochures and projected political ads onto buildings with laser light shows. To which many Russians responded: Why bother?

“United Russia will win probably, and there is no other choice,” said Rosa Ivanovna Agaeva, 73, a Communist Party supporter. During Soviet rule, she said, there was not as much airy talk of democracy but a lot more economic security.

“That was the way we lived, and we got used to it,” said Agaeva, who worked in a pharmacy. “You were given a job with regular pay.”

Since there doesn’t appear to be any real opposition to the Putin/Medvedev bloc, it seems the Russian people are doomed for the moment to live in a country where democracy is little more than a sham.