Total compensation has been going up and the non-wage portion of said compensation is basically "eating up all" of the past increases since approximately 1974 resulting in a stagnant hourly wage.

This post is somewhat related to Doug’s post about the recent jobs report. In that post Doug mentions that wage growth has been stagnant. And indeed has been the case for quite sometime. However, part of the problem is that people look at hourly wages which is only part of the picture when looking at compensation. A FRED blog post from quite awhile ago shows that what has been happening is that total compensation has been going up and the non-wage portion of said compensation is basically “eating up all” of the past increases since approximately 1974. 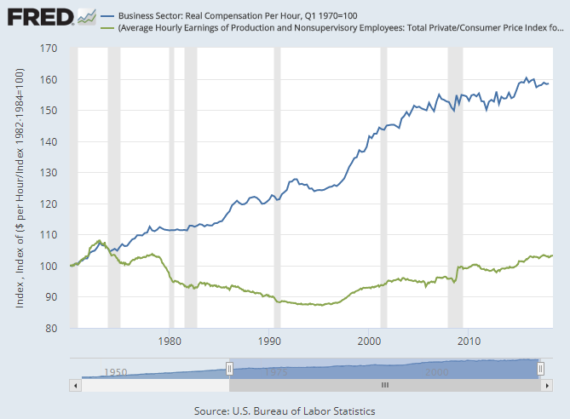 Now, I am not saying that there is no issue with the stagnant hourly wages or anything like that. In fact, this actually presents an actual problem and a source for growing wage income in equality.

Consider the table below. The numbers are illustrative and are not to be reflective of actual wages. So we have a “medium income worker” and a “high income worker”. The benefits consists only of health care. It is assumed that total compensation will grow by 3% and that health care grow’s at a rate of 6%. In the end this results in a wage growth for the medium income worker of 1.8% vs. 2.4% for the high income worker. This is a substantial difference especially when compounded over time. After 20 years the medium income worker’s wage income will be almost 43% higher whereas the high income worker will have a wage income that is 61% higher. Another way to think of it is to use the “Rule of 72”. Using this rule you can approximate the doubling time for a given growth rate. Divide 72 by 1.8 and 2.4 and we get doubling times of 40 and 30 years respectively. Which would you rather have, the 30 year time span to double your take home wage or the 40 years? I know which one I’d rather have.

And to be clear this is simply baked into the compensation process by policy. The policy of moving healthcare expenditures as an untaxed non-wage benefit is what is driving the above numbers. Absent any other effects such a policy will lead to growing wage income inequality over time. I would also suggest that there is quite possibly a perverse feedback effect here. The separation of healthcare benefits may very well be part of the reason why healthcare expenditures have often grown faster than the over all economy.

How do we fix this? I have no idea. This policy has created a number of special interest groups that will resist changing such a policy such as the workers themselves. Right now healthcare benefits are untaxed. Convert that benefit into wage income and it will be taxed which will leave all workers strictly worse off. The healthcare industry also probably likes this policy in that many workers likely consider this benefit as a “gift” from the company and one they should “make the most of”–i.e. over utilize healthcare services and products.