American troops in Afghanistan are overindulging in the fast food fare brought in to raise their morale. 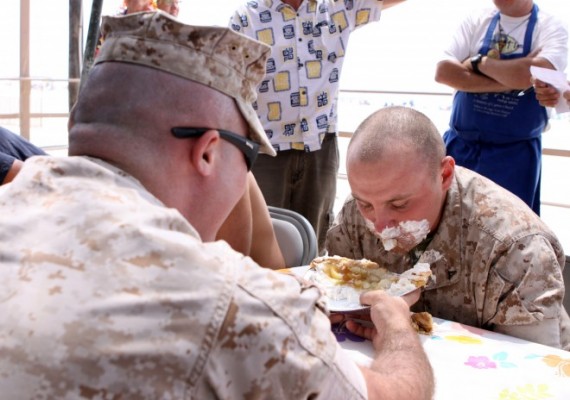 Vikash Yadav has been scouring the blogs of American soldiers in Afghanistan and has dubbed it the “Chocolate Bunny War.”

There is something odd about this occupation when viewed from the perspective of those stationed at major bases in Afghanistan. It never quite ceases to amaze me that soldiers stationed in a war in South Asia boast of going to Tim Horton’s for an iced cappuccino or a bucket of chicken at KFC. Obviously, these features are designed to boost troop morale, but they also seem to make the Occupation surreal. While war tourists (i.e. journalists) seek out and focus on combat operations, many soldiers experience the war primarily from within the relatively secure confines of their base.  It is well known that war is boring, however the idea that war can be comfortable and even fattening is still a bit peculiar.

I’d have presumed Yadav was making an absurd leap based on a couple of blog posts had I not also come across the report from Katie Drummond of Wired‘s Danger Room indicating that the brass seems to have noticed the problem.

Troops overindulging at the chow hall’s ice cream bar might not be able to conceal dietary lapses from their higher ups for much longer. The Pentagon’s looking to keep tabs on troop nutrition 24/7 , using “non-invasive or minimally invasive techniques” to track a series of nutritional indicators on an ongoing basis.

Darpa, the Pentagon’s far-out research arm, is hosting a meeting of the minds for nutritionists, doctors and developers, with the aim of creating easy-to-use gadgets that can measure key dietary indicators. The agency’s “Point of Use Nutritional Diagnostic Devices Workshop” will identify “the top 10 essential nutritional biomarkers,”  including antioxidants, vitamins and metabolites, and potential methods to monitor them in real-time.

t’s not uncommon for troops to pack on pounds during deployment, with even Lt. Gen. Mark Hertling — the man behind the Army’s nutritional overhaul — copping to a 20 pound weight gain that he blames on “27 different types of meals with all kinds of gravy and things that aren’t healthy for you.”

And as Darpa’s workshop announcement notes, good nutrition is about much more than just healthy body weight. Well-fueled troops will not only perform better, they’ll “minimize susceptibility to illness, infection and injury.”

But how far do you take the nutrition push? As Darpa plots 24/7 nutrition monitoring and the Army overhauls their mess hall menu, the top U.S. commander in Afghanistan — himself a notorious fitness nut — is bringing fast food outlets back to military bases.

I was immediately reminded of a piece I wrote for New Atlanticist two years ago titled “German Soldiers Too Fat and Drunk to Fight?“  It was based on reports from the British press that 40 percent of Bundeswehr troops were overweight, a phenomenon attributed to lack of exercise and a diet rich in sausage and beer.    Apparently, Canadian donuts and Southern fried chicken are no better — even if there is a picture of a colonel right there on the box.