A political cartoonist for The Washington Post crossed a line and, rightfully, got condemned for it. 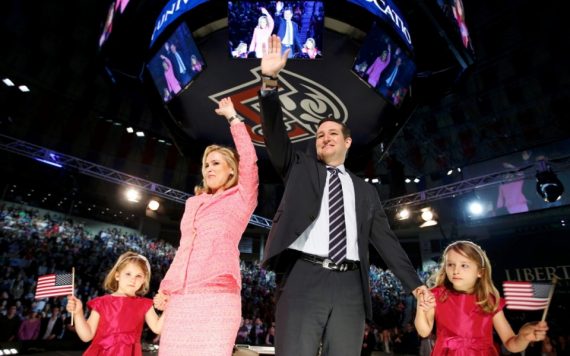 The Washington Post has pulled a political cartoon depicting Senator Ted Cruz and his two young daughters after largely bipartisan push back erupted over the way the children were depicted:

Ted Cruz obtained new ammunition Tuesday to shoot at his favorite bogeyman, the mainstream media, after The Washington Post depicted his two young daughters as monkey-like characters doing the bidding of their father.

By early Tuesday evening, backlash to the cartoon had swelled to the point where the Post took down the image and replaced it with an editor’s note.

Ann Telnaes, a Post cartoonist, drew an animation of the Republican presidential contender in a Santa outfit, with two hatted creatures, after the family gamely appeared in a parody television advertisement that aired during “Saturday Night Live” this weekend.

In the 90-second spot, “Cruz Christmas Classics,” which had nearly 1.5 million views as of Tuesday afternoon, the daughters and Cruz’s wife, Heidi, read from a fictional holiday-themed children’s book while sitting together on the couch.

“Classy. @washingtonpost makes fun of my girls. Stick w/ attacking me–Caroline & Catherine are out of your league,” Cruz tweeted Tuesday.

Even Marco Rubio, who has been tangling loudly with Cruz for several weeks, came to his defense.

“Wash Post cartoon featuring @tedcruz’s children is disgusting. The Post saying the kids are ‘fair game’ is even worse,” he tweeted.

“Thank you, @marcorubio Appreciate the kind support. We’re both Dads of young kids, and it’s hard enough on them,” Cruz tweeted.

“Ted Cruz has put his children in a political ad — don’t start screaming when editorial cartoonists draw them as well,” she wrote.

She added that Cruz had now made his kids acceptable targets for satire.

“When a politician uses his children as political props, as Ted Cruz recently did in his Christmas parody video in which his eldest daughter read (with her father’s dramatic flourish) a passage of an edited Christmas classic, then I figure they are fair game,” she wrote.

Cruz frequently cites his two grade-school daughters in his stump speech, which also frequently ridicules coverage of Cruz in prominent national publications like the Post and The New York Times. Cruz frequently jokes that reporters and editors will “check themselves into therapy” when he is elected because they will be so distraught.

In place of the cartoon Fred Hiatt, the Post’s editorial page editor, wrote in a post why it was taken down.

“It’s generally been the policy of our editorial section to leave children out of it. I failed to look at this cartoon before it was published. I understand why Ann thought an exception to the policy was warranted in this case, but I do not agree.”

You can find a representation of the cartoon, which was apparently originally an animated GIF, in the story posted at Mediaite, and Telnaes appears to have based her cartoon on an ad that Cruz ran in Iowa over the weekend in which he reads a politicized version of “The Night Before Christmas” to his daughters while a narrator speaks. That commercial, in turn, refers back to the time in 2013 when Cruz read from Dr. Seuss’s “Green Eggs And Ham” during his budget filibuster that was part of the debate over the 2013 government shutdown, explaining that he needed to read them their bedtime story.  Just for reference, the Cruz’s have two daughters, Caroline, who was born in 2008 and Catherine, who was born in 2011. So, basically, we’re talking about two girls, one of whom is in, I would assume, First Grade and the other of whom isn’t old enough for Kindergarten yet.

As I think I’ve made clear many times here, I am no fan of Ted Cruz in any sense of the word. I find his politics extreme and his demeanor, well, indicative of someone who just isn’t trustworthy. Were he the Republican nominee I not only wouldn’t support him, but I’m convinced he’d lead the GOP down the road to electoral disaster just like nominating Donald Trump would. That being said, I’ve got to side with those who say that Telenaes crossed a line here and that Editorial Page Editor Fred Hiatt was right to pull the cartoon, although his admission that he didn’t even review it before it was posted makes one wonder exactly what the “editor” does over there at the post.

There is, as Hiatt says, a line that has long been drawn in American politics that says that children, most especially young children but also including older kids, are off limits. You can say whatever you want about a candidate, because they’re after all the one running for office. Candidate’s spouses and adult children are also, arguably, also “fair game” to the extent that they involve themselves in electoral politics. Younger children, though, should be left alone, not only because of their age but because of the fact that they are not voluntary participants in their parents campaign and because depicting them in demeaning ways is something that could lead to embarrassment that kids don’t deserve to be put through. Once these children become adults and they start getting involved in politics in their own right, such as Meghan McCain and to some extent Chelsea Clinton have, then the rules are arguably much different. When they are minors, though, and especially when they are as young as the Cruz daughters, taking the kind of shot that Telnaes did is both cheap and low-class.

This isn’t the first time that someone has crossed the line, of course. Back in the 1990s, Rush Limbaugh came under attack when a segment of his old television show used a graphic of a dog while he talked about Chelsea Clinton, who was a teenager at the time. More recently, David Letterman got himself in hot water over jokes he made about Sarah Palin and her then teenage daughter Willow and, just over a year ago, a Communications Director for a Republican Member of Congress ended up resigning her position after posting a long diatribe to Facebook in which she mocked the Obama daughters and the way they had dressed for the President’s ceremonial “turkey pardoning” on the day before Thanksgiving. Even in our overly polarized and politicized society, there seemed to be near universal recognition that incidents like this were entirely inappropriate.

Telnaes, of course, is arguing that the fact that Cruz used his daughters in a political ad somehow changes the game, but I’d argue that she’s still mistaken. It’s not at all uncommon for a politician to use scenes of family time together in campaign ads, campaign videos, or campaign literature, and you’ll often see spouses and children join a candidate on stage at the end of a political rally, as seen in the photo of the Cruz family at the top of this post. That doesn’t mean that the children have suddenly become legitimate targets of political attack and ridicule in the manner that Telanaus attempted to do in her cartoon. Just imagine, for example, if a political cartoonist had depicted the Obama children as monkeys after the Obama campaign released an ad depicting the then-Senator spending time with his daughters while Michelle talked about what kind of father he tries to be. The irony of all this, of course, is that, while Telnaes is obviously not a Cruz fan, what she’s done here will likely inure to his benefit to the extent it reinforces the narrative on the right that the media is biased against conservatives. Or, as Telnaes’s Post colleague Callum Borchers puts it:

Whether you agree with Telnaes’s original reasoning or Hiatt’s overriding rationale, one thing should be obvious to any political observer: This is a win for a candidate who is rising in the polls thanks to support for more conservative Republicans and who has been highly critical of the press — most memorably during the third Republican presidential debate, when he blasted the moderators’ questions as being illustrative of “why the American people don’t trust the media.”

The cartoon episode does two things for Cruz: It gives him a piece of evidence to pull out whenever he wants to argue that the loathsome “mainstream media” doesn’t treat him — or conservatives in general — fairly. And it makes his and his supporters’ anti-establishment pushback seem effective, by virtue of the retraction.

So, if Telnaes was trying to attack him her attack backfired spectacularly. The outrage would have been heard from coast to coast, and it would have been deserved. It’s just as wrong in this case, and the Post was right to pull the cartoon. Ideally, Telnaes will recognize her error and apologize to the Cruz family.

FILED UNDER: Campaign 2016, US Politics, Ted Cruz, The Washington Post