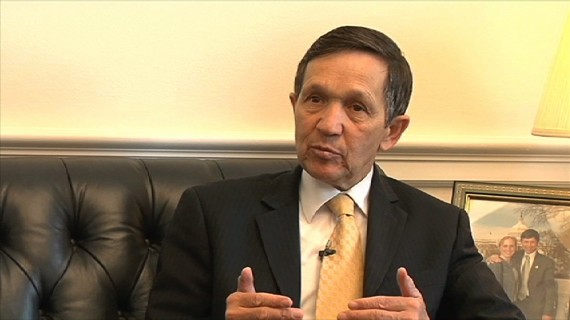 After he lost the primary to hold on to his re-districted Ohio Congressional seat to fellow Democrat Marcy Kaptur, there was some speculation that Dennis Kucinich would move to Washington State and run for office there. As it turns out, we’ve seen the Last Hurrah of Dennis Kucinich:

Rep. Dennis Kucinich (D-Ohio) will not seek a House seat in Washington state this year after losing a primary to a fellow Democratic Member in March.

In an email to his supporters, Kucinich thanked the “tens of thousands of concerned Citizens for Kucinich who in the past few months have written, emailed and called to discuss my running for Congress in Washington State.”

“After careful consideration and discussions with Elizabeth and my closest friends, I have decided that, at this time, I can best serve from outside the Congress,” he continued.

After he lost the primary to Rep. Marcy Kaptur (D) in northern Ohio’s 9th district, Kucinich traveled to Washington state for an event, polled supporters on his website about where he should run and told a progressive media outlet that he would “find a way back into public service.”

Speculation about Kucinich’s cross-country run started early on this cycle when it was clear that Ohio Republicans would target the Cleveland area in their redraw of the state’s congressional map. GOP mapmakers eventually moved Kucinich and Kaptur into the same lakeside district that included more of the Congresswoman’s current territory.

Kucinich’s announcement marks the end of his eight terms in Congress and comes just two days before the filing deadline in Washington state.

Oh Dennis, Dennis. What will we do without you?

Joe The Plumber Running For Congress