As a general rule, Presidents are entitled to have a Cabinet and advisers he is comfortable with, but a Cabinet full of "yes men" is not ideal with any President, and certainly not with this one. 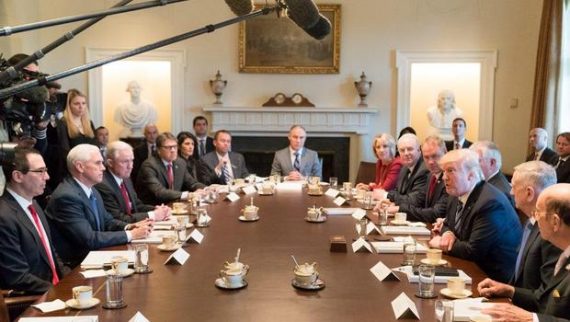 In the wake of the firing of soon-to-be-former Secretary of State Rex Tillerson and National Security Adviser H.R. McMaster and their replacements with Mike Pompeo and former Ambassador to the United Nations John Bolton, many analysts have lamented the fact that these departures have eliminated two voices that appeared to be voices of moderation within the Administration. The fact that both men are being replaced by men who are not only closer to the President’s views, but arguably seem to be more likely to push him toward more aggressive stances when it comes to issues such as the future of the nuclear deal with Iran, the situation on the Korean Peninsula, America’s relationship with China, and our relationship with Russia in general and Vladimir Putin particularly has only heightened that concern. I’ve noted many of these concerns regarding both Pompeo and Bolton (see here and here)  in previous posts here over the past weeks.

In a recent column in The Washington Post, though, Marc Theissen pushes back against the idea that we should expect or desire Cabinet officials who seem to think it is their job to oppose the President:

In the wake of President Trump’s decision to appoint John Bolton as his national security adviser and Mike Pompeo as secretary of state, a consistent criticism has emerged: Trump will no longer have any “adult” supervision in the national security decision-making process or any Cabinet-level “checks” on his own worst instincts.

This view is not only insulting, it is fundamentally anti-democratic. The Constitution places many checks on a president’s power, including Congress, an independent judiciary and a free press. It’s not the job of Cabinet officials to be a “check” on the president. Their job is to give the president options so he can make decisions — not restrict choices to constrain him.

Theissen goes on to argue that the reason that Tillerson and McMaster are both gone is because they didn’t fill this role to the President’s satisfaction:

One of the reasons Trump is reshuffling his national security team is because he has reportedly been deeply frustrated with the lack of options presented to him. In April, he reluctantly recertified the Iran nuclear deal but told his national security advisers that he didn’t want to recertify again — and instructed them to provide a range of options before the next deadline in October. They didn’t do it. That is unacceptable. According to the Weekly Standard, Trump was so angry that no one presented a decertification option that he put Sen. Tom Cotton (R-Ark.) on speakerphone during an Oval Office meeting to make the case — providing advice that Trump soon followed.

More recently, the New York Times reported that Trump has grown frustrated with the Pentagon’s failure to provide him with military options for North Korea. According to the Times, Pentagon officials are “worried that the White House is moving too hastily toward military action on the Korean Peninsula that could escalate catastrophically. Giving the president too many options, the officials said, could increase the odds that he will act.” Sorry, that’s not how it works in our democracy. We have civilian control of the military, and the president is commander in chief. If he wants military options, it is the Pentagon’s job to deliver them. That some in the Pentagon don’t understand that is a greater threat to our democracy than Trump’s temperament.

Cabinet officers are supposed to give the president options (including some they may disagree with), provide their best advice, and then salute and carry out his orders. Bolton is determined to make that happen. Axios reported that he plans to be an “honest broker” who will make sure that all sides are heard when national security decisions are discussed. But he will also be an “enforcer” who makes sure that Cabinet officials carry out the president’s orders. If the president directs the Pentagon to produce military options for North Korea, or demands more creative options on the Iran nuclear deal, slow walking will no longer be tolerated. That is a good thing.

Leaving aside for the purposes of this post the merits of Theissan’s comments about Bolton and Pompeo individually or the impact, with which I disagree on several levels, he does have a good point here about the proper role of Cabinet Secretaries and other Presidential advisers. As I pointed out yesterday in my post about David Shulkin’s response to his firing as Secretary of Veterans Affairs, which continued today with appearances on several morning news shows such as Morning Joe, in the end this President, like any President, is entitled to have the Cabinet and the advisers that he is most comfortable with and that he believes will do the best job of advising him as to the proper course of action in particular policy areas. This is especially true when it comes to an area as important as foreign policy, which is the one area of policy where Presidents have the most autonomy from Congress and the Judiciary. To the extent that the President feels that a particular adviser or Cabinet Secretary is not fulfilling that role to his satisfaction then he is certainly within his right to dismiss those officials and replace them with men or women of his choosing who he believes will better fill the role in question.

The near-absolute authority of the President to hire (subject to Senate confirmation where required) and fire these officials was a central part of the battle that occurred between Congress and President Andrew Johnson in the years after the Civil War, and it was President Johnson’s decision to fire Secretary of War Edwin Stanton that led to his impeachment and trial in the Senate. Prior to the dismissal of Stanton, Congress passed into law over President Johnson’s veto a bill called the Tenure of Office Act that required the President to seek the advice and consent of the Senate before dismissing a Cabinet Secretary. In retrospect, it seems clear that this law was unconstitutional since it improperly limited Presidential authority over the Executive Branch and expanded the powers of Congress beyond what is laid out in Article I of the Constitution. With the failure of Johnson’s impeachment trial, though, the law became something of a dead letter, although it did come back into focus a few times before finally being repealed in 1887. What this entire historical episode established, though, is the general principal that a President is free to fire Cabinet officials and, of course, Presidential advisers, at whatever time and for whatever reason he chooses.

All that being said, there is some value in the idea that Cabinet officials and other advisers should see their role as something other than being “yes men” for the President. This is especially true in the case of a President like Donald Trump who, as The Hill’s Niall Stange clearly prioritizes loyalty in his advisers. While it’s certainly true that Cabinet Secretaries and others who work for or speak for the President should be loyal to the President’s decisions once they have been made, it’s also important for those positions to be filled by people who will do more than simply reinforce the President’s own positions. Much was made, for example, of then President-elect Obama’s decision to appoint his opponent for the Democratic nomination in 2008 as his Secretary of State, arguably the most position in the Cabinet. Many comparisons were made to Lincoln’s so-called “Team of Rivals” Cabinet, which was the subject of a popular book by historian Doris Kearns Goodwin that had been written just a few years earlier. As I noted yesterday, Clinton wrote in the book she wrote prior to running for President in 2016 about her experience in that role about to the extent to which she often disagreed with decisions the President made. She argued in favor of her position in meetings and conversation with the President, and presented him with options that often differed from those presented by other national security officials and the President. Once the decision was made, though, she carried it out and did what was necessary to support it both publicly and behind the scenes. This is good example of the “proper role” of a Cabinet official or Presidential adviser.

The problem with Trump’s decision to replace officials like McMaster and Tillerson with the likes of Bolton and Pompeo is that it seems readily apparent that what he’s making it less likely that he’ll hear voices contrary to his “gut” feelings in a particular policy areas and that he’ll be deprived of the cautionary advice of people who see these matters from a different perspective. Unlike Theissan, it does not seem apparent at all to me that either Pompeo or Bolton will be likely to fulfill that role, and far more likely that they will tend to reinforce Trump’s instincts in the foreign policy arena, which seem to be guided as much by what he sees on Fox News Channel than by logic, reason, and appreciation of the consequences of a particular course of action. James Mattis remaining as Secretary of Defense is a good sign since it seems clear that he has been particularly effective at calming many of the President’s more aggressive tendencies. Going forward, though, he’ll likely find himself in situations where he’s on one side and the President, Secretary of State, and National Security Adviser are on the other. While Mattis’s sense of duty to his country and his view of his position as being the man who speaks for the men and women in uniform make it unlikely that he’d be the kind of person who would give up and walk away in frustration, one does have to wonder if Trump will grow as frustrated with him as he obviously did with McMaster and Tillerson. In that case, he may decide that he needs someone in charge at the Pentagon who is “on this team” far more than Mattis might be. If and when we reach that point, we should be truly concerned.

Theissan is right that a President is entitled to Cabinet officials and advisers who he feels will have his back once decisions are made, however it’s also true that a Cabinet filled with people who just say “yes, Mr. President” is not doing a service to the President or to the country and that it is especially dangerous with a President as mercurial and prone to whims as this one clearly is.