What Obama Could Learn From Nixon

One foreign policy analyst argues that President Obama should look to Nixon's Vietnam withdrawal strategy for ideas on Afghanistan. 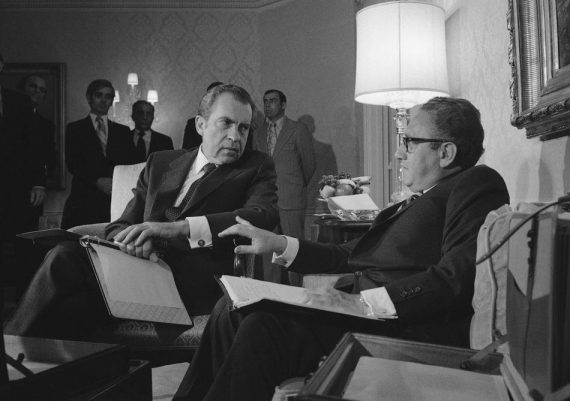 Gideon Rose, the editor of Foreign Affairs, had interesting article in Sunday’s New York Times arguing that President Obama could look to the 37th President for an example of how to handle the withdrawal of American forces from Afghanistan:

In late 1969, faced with increasing domestic pressure to end the war, the president and Mr. Kissinger settled on a strategy to reduce the American role in ground combat while fending off a South Vietnamese collapse. They sought to walk away from the war, get American prisoners back and avoid formally betraying an ally — something they believed would damage America’s reputation. They recognized that their approach would leave the South Vietnamese vulnerable following the American withdrawal, but considered that an acceptable price to pay for getting out.

They never said this last bit publicly, of course. But in private, they were more candid, as the White House tapes showed. During an August 1972 Oval Office chat, Mr. Nixon told Mr. Kissinger:

“Let’s be perfectly cold-blooded about it…. I look at the tide of history out there, South Vietnam probably is never gonna survive anyway…. [C]an we have a viable foreign policy if a year from now or two years from now, North Vietnam gobbles up South Vietnam?”

Mr. Kissinger replied that American policy could remain viable if Saigon’s collapse ” looks as if it’s the result of South Vietnamese incompetence. If we now sell out in such a way that, say, in a three- to four-month period, we have pushed President Thieu over the brink…. it will worry everybody… So we’ve got to find some formula that holds the thing together a year or two, after which… no one will give a damn.”

Although Mr. Nixon and Mr. Kissinger had steeled themselves for the possibility of an eventual South Vietnamese collapse, they hoped it could be avoided and did what they could to prevent it. And had events in Washington played out differently — with Watergate not crippling the administration and with Congress less hell-bent on slamming the door behind the departing ground troops — they might have succeeded.

President Obama, Rose points out, does not have the same problems that Nixon had in 1972 and afterward. He isn’t hobbled by a scandal, and there’s little chance that Congress would impose an immediate cut off of aid in the years after withdrawal. More importantly, the Afghanistan War is not wrapped up in the same kind of social protest and crisis that Vietnam was. Theoretically, then, it might be possible for Obama to pull off what Nixon could not — withdraw from Afghanistan under circumstances that will keep the country viable enough to survive long enough so that the United States doesn’t appear to have abandoned the Karzai government. It’s a cynical approach, no doubt, but if the priority is to get out cleanly in a manner that doesn’t harm our long term interests, it’s makes a certain amount of sense.

In order to pull it off, though, Rose says that three things are required:

THE first rule of withdrawal is you do not talk about withdrawal. You may agree with the doves about the value of exiting, but you should respect the hawks’ fears about what will happen once people realize what you are doing. You must deflect attention from the true state of affairs, doing everything you can to keep your foes and even your friends in the dark as long as possible.

The second rule of withdrawal is to lay down suppressive fire so the enemy cannot rush into the gap you leave behind. The Nixon administration was brutal and ham-fisted about this, using secret bombing runs along the Ho Chi Minh Trail and expeditions into Cambodia and Laos to buy time and space for its “Vietnamization” programs to work. Thanks to technological advances, the Obama administration can do the same thing while incurring far fewer human, financial, legal and political costs. Drone attacks and raids against enemy targets in Pakistani sanctuaries today are a precision replay of actions in Cambodia and Laos, but more effective and less controversial.

The third rule of withdrawal is to remain engaged, providing enough support to beleaguered local partners so they can fend off collapse for as long as possible. Withdrawal should be defined as the removal of ground forces from direct combat, not the abandonment of the country in question.

Rose notes that Obama has three things in his favor that Nixon did not, domestic popularity,  a Congress and public that are largely concentrating on economic issues, and a favorable international climate (unlike Nixon, Obama doesn’t have to try to pull this off while still engaged in a Cold War with a nuclear superpower). This, he argues, makes it possible for him to pull off what essentially amounts to a strategic withdrawal from a battlefront that is sucking us dry, without turning it into a defeat.

Like I said, it’s a cynical policy, because it essentially means propping up the Afghan regime for a short time with the knowledge that we’ll be abandoning them in the near future. Very Nixonian. Whether President Obama and his advisers have the guts to pull it off is an open question, but it’s an idea worth considering.\