President Trump and his supporters like to claim that the economy has been booming since he became President. A look at the numbers reveals that this is not the case. 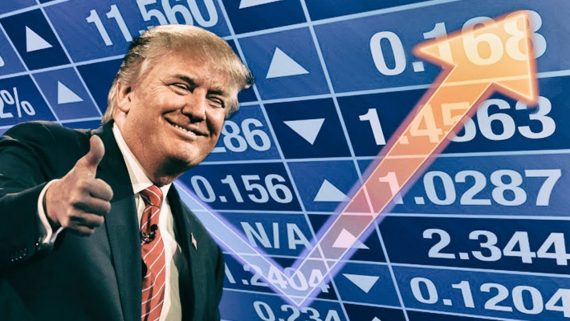 President Trump and his supporters are fond of pointing to things such as the stock market, which has been an undeniable upswing since shortly after Election Day in 2016, and mostly positive numbers when it comes to job creation and economic growth as evidence that the President is delivering on his promise of a stronger economy. Indeed, in his speech today at the World Economic Forum in Davos, Switzerland the President boasted about what he claims to be America’s strong and growing economy as evidence that his policies were working and that they were benefiting the world. As Paul Waldman notes in today’s Washington Post that the actual numbers, while they are positive, are hardly overwhelming:

Just to be clear, no one is saying the economy is doing poorly under Trump, because it isn’t — it’s essentially continuing along the path it was on before he took office. GDP growth is steady but fairly low, unemployment is extremely low, wages are very slowly starting to tick up, and so on. In the American economy today almost anyone can find a job, but it may not be the kind of job they want.

Of course, that’s not the story you hear from the president. He likes to argue in anecdotes: every time a corporation says it’s going to create some jobs, it’s proof that his stewardship is bringing spectacular results. But in an economy as enormous as ours, corporations are constantly adding jobs and cutting jobs, and the fact that a few thousand are being created here or there tells you nothing about how the entire economy is doing.

Trump may trumpet every time a factory opens, but he won’t talk about, for instance, the steady stream of job losses in the retail sector. And Trump’s more specific promises aren’t being kept, either. Remember how he was going to revive the coal industry? According to the Bureau of Labor Statistics, last January coal mining employed 50,000 Americans, and as of December it employed 50,500 Americans. Quite the coal revival. Remember that Carrier plant in Indiana Trump worked so hard to “save”? They’ve laid off 600 people.

But isn’t the stock market up, as Trump never tires of telling us? Yes it is — the S&P 500 rose over 20 percent in 2017. Which is not as much as it grew in, say, 2013, when it rose 30 percent and some Kenyan communist whose name I can’t remember was president, but it’s still doing quite well. And if your economic well-being is tied closely to the stock market, that’s good for you.

But for most Americans, the performance of the stock market matters little if at all. At a more fundamental level, Trump is taking the most acute problems the American economy faces and exacerbating them. He’s showering benefits on the wealthy and corporations. He’s moving power away from workers and into the hands of employers. He’s allowing corporations a freer hand to mistreat their employees, pollute the environment, and screw over consumers without accountability. He’s also helping Republicans launch a war on the safety net. The net effect of all these policies will be to increase inequality, the most critical long-term problem the economy faces.

None of that is going to stop the White House from saying over and over that Trump’s extraordinary leadership has made us all prosperous. Nor will it stop Trump supporters from attributing everything good that happens in the economy to Trump, just as they insisted when Barack Obama was president that he had nothing to do with any positive developments.

Waldman presents two charts to support his argument. The first shows GDP growth going back to 2010: 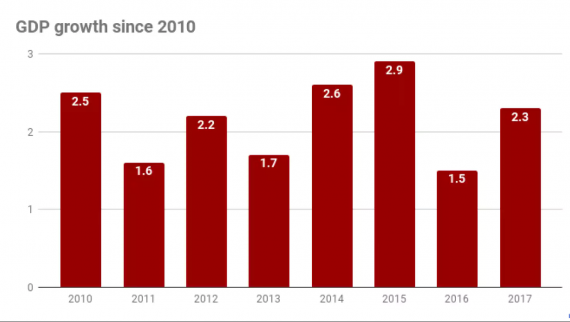 And the second showing job growth over the same period: 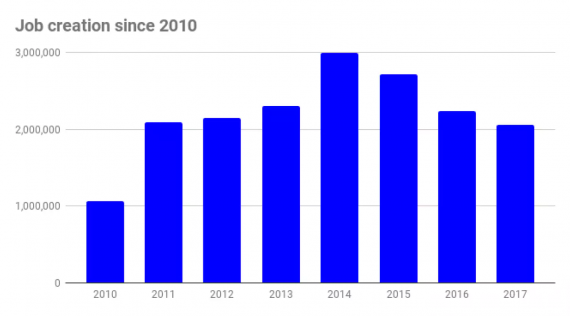 Both of these charts make clear something I noted several times during the past year when we’ve reviewed the latest economic data. Namely, that is the fact that while the economy continues to move in a positive direction it is simply not the case that there has been a significant economic boom of any kind since Trump took office. Even the stock market, which Trump and his supporters have spent the past year citing as evidence of how well the economy is performing under the President shows us that the Trump economy, to date, isn’t really performing any differently than it did under the Obama Administration. While the stock indices under Trump have set records, their actual year-to-year growth doesn’t match those that we saw under President Obama. In fact, the market’s performance under Trump has so far trailed what we saw under both President George W. Bush and Obama. In other words, while the economy under Trump’s first full year in office has done well, it hasn’t significantly outperformed what we experienced earlier in the recovery and there’s no indication that we’re going to see significant changes in those facts any time in the near future.

In reality, of course, the President usually has little to do with the performance of the economy. While the policies implemented by the Federal Government, including both spending and taxation, do have some influence over economic performance they are rarely the primary determining factor in either the direction or strength of either economic or job growth. Of far more importance are factors such as consumer and business expectations and optimism as well as the state of the economy in the rest of the world which has a significant impact on the economy here due to the fact that so much of the American economy is dependent on international trade and investment. As I noted earlier today, our current level of economic growth is likely being bolstered by the fact that, after years where other parts of the world were still mired in slow growth or even recession, the economies of other parts of the world are finally starting to turn around for those countries. That is likely to ensure to our benefit for several years at least.

Perhaps, in the end, the President and his supporters will be proven right and the economy will reach the heights they are predicting. Even though I oppose this President for many reasons I hope that happens because it would be good for our country and for the world. For now, though, the Trump economy isn’t really much of anything to write home about.