What Your Drink Of Choice Supposedly Says About Your Politics 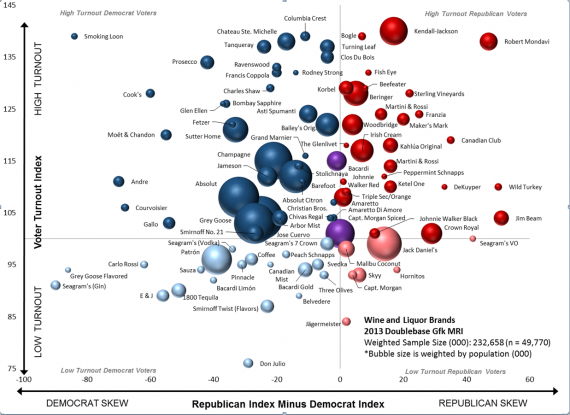 Former Mississippi governor and uber-Republican Haley Barbour loves bourbon. Franklin Roosevelt mixed martinis. And, as it turns out, those two partisans have something in common with their base voters: Consumer data suggests Democrats prefer clear spirits, while Republicans like their brown liquor.

The results are fascinating: Analyzing voting habits of those who imbibe, Dube found that 14 of the top 15 brands that indicate someone is most likely to vote are wines.

If you see someone at your New Years party tonight drinking Kendall-Jackson or Robert Mondavi wines, that person is highly likely to vote, and they’re likely to vote Republican. Someone who savors a Chateau Ste. Michelle Merlot, one of Washington State’s top producers, or Smoking Loon, they’re likely to cast ballots for Democrats.

And, perhaps not surprisingly, given the relative youth of those involved, people who take shots of Jagermeister or Don Julio are much less likely to vote.

The chart is set forth above, and you can click to enlarge for easier reading. In my case, it says that my choices in regard to wine tend to lean Republican while my choices in harder liqours tend to lean Democratic. Perhaps that’s the kind of bipartisanship this nation needs.