I’ve already discussed the Rice hearing below, but I think that the following issue deserves its own post.

Before Senator Boxer criticized the Iraq War, she lectured the nominee (emphasis added):

And if you’re going to become the voice of diplomacy, this is just a helpful point. When Senator Voinovich mentioned the issue of tsunami relief, you said — your first words were The tsunami was a wonderful opportunity for us. Now, the tsunami was one of the worst tragedies of our lifetime, one of the worst, and it’s going to have a 10-year impact on rebuilding that area. I was very disappointed in your statement. I think you blew the opportunity. You mentioned it as part of one sentence. And I would hope to work with you on this, because children are suffering; we’re worried they’re going to get in the sex trade. This thing is a disaster — a true natural disaster and a human disaster of great proportions. And I hope that the State Department will take a huge lead under your leadership in helping those folks in the long range.

I might be overlooking something here, but I sure can’t find the statement to which Boxer referred. Here’s the Voinovich exchange in full (emphasis added):

VOINOVICH: Thank you, Mr. Chairman. First of all, I’d like to publicly thank Secretary Powell and Secretary Armitage for the outstanding — and their team for the outstanding job that they’ve done for this country during the last four years. I’d like to thank you, also, for being willing to come before us to seek confirmation as secretary of state of the United States of America. I couldn’t help but think, as I have heard my colleagues ask questions here today, the enormous responsibilities that you’re taking on in terms of the world. There’s no country in the world where a foreign minister is being asked questions about the whole world. And you’re being asked questions about the whole world. And what are you going to do? And I’d like to share with my colleagues that one of the things that we all ought to be concerned about is whether or not the new secretary of state is going to have the budget and the human capital that she is going to need to get the job done.

VOINOVICH: Are we going to prioritize, in terms of this nation, the money necessary so that many of the questions that have been asked here at this table about, What are you going to do about this, and what are you going to be doing about that? are going to be — we’re going to be able to do something about it, and at the same time, maybe look at our own tax policy, and give consideration to what Senator Sarbanes has been talking about, the trade deficit that’s looming and the account deficit.

And I’m very happy to hear that Bob Zoellick is interested in coming over, because Bob’s got tremendous background in the area of trade, which I think is essential to almost everything that you’ll be doing.

I was glad also, in your testimony you said that, More than ever, America’s diplomats will need to be active in spreading democracy, fighting terror, reducing poverty and doing our part to protect the American homeland. I will personally work to ensure that America’s diplomats have the tools they need to do their jobs, from training to budgets to mentoring to embassy security.

You’ve dealt with a lot of the major issues that are on everyone’s mind. But I think you know I have a particular interest in Southeast Europe, where I spent probably more time than any member of the Foreign Relations Committee. And we’ve made some progress there.

But I am very concerned about what’s going on in Serbia- Montenegro today. I’m very concerned about what’s happening in Kosovo. Because I really believe that, unless things are stabilized in Serbia-Montenegro and we stabilize things in Kosovo, that we could very well have another crisis on your hands this year, particularly because we’re discussing the final status of Kosovo, what’s going to be happening there.

I’d like to say that Mark Grossman has done a good job. I’d like to know, where is that on your priority list? And are you familiar with it? And what do you — you know, we’ve got our NATO forces over there.

RICE: And so I think we have to have a new, renewed effort on that piece of it, getting our message out. We also have to have a new, renewed effort on getting our people back and forth. Because people, when they come to the United States and see who we are and can get past some of the filter of perhaps some of the sides of America that are not well-liked or respected, I think do come away with a different view of us. And so I will have a strong emphasis on getting our message out, on getting the truth to people, on diminishing the — on doing something to mitigate against the propaganda that’s out there against us, but also on going to our long-time partners and friends, and saying, We have a common purpose here, a great cause ahead of us. And the trans-Atlantic alliance, you know, sometimes it’s a little bit like whatever it was that Mark Twain said about Wagner’s music. I think he said it’s better than it sounds. Well, in fact, our trans-Atlantic alliances are really better than people give us credit for. We’re cooperating in a lot of places. We’re working hard together in a lot of places. We’ve had a lot of successes. But we can do more in this period of tremendous opportunity to unify the great democracies, the great alliances for a push to spread freedom and liberty. I think it’s an agenda that is inspiring. And I think we’ve done a lot already, but there is much more that we can do.

Contrary to Boxer, Voinovich never brought up the tsunami. Indeed, he devoted his question to Southeast Europe, and Rice’s discussion of the “tremendous opportunity” related to democracy promotion and trans-Atlantic ties.

I scanned the transcript for every reference to “tsunami,” “disaster,” “Asia,” “India,” and “opportunity.” I found nothing incriminating. The only time that Rice opened her statement by invoking “opportunity” was here (emphasis added):

RICE: We all believe, and most especially the president, that we have a really good opportunity here, given the election of a new Palestinian leader, and given the Israeli Gaza withdrawal plan, which is linked to the West Bank through the four settlements that would be dismantled in the West Bank as well. We think this is a moment of opportunity. That means that there is going to have to be engagement at all levels. I expect, myself, to spend an enormous amount of effort on this activity. I can’t substitute for the parties and their willingness to take on their responsibilities, and that’s the message that we have to keep sending. We’ve had to note that how hard this road is going to be was in evidence during this last few days. And we’ve pressed very hard for the Palestinians to take on terrorism because we’re not going to get very far if there is terrorism from the Palestinian militants. But you can be sure that we will have very active engagement because we think this is a time of responsibility. I think I need to, for the time being, demure on the question of a special envoy. No one has objections in principle to the idea of an envoy, but it is a question of whether that is appropriate to a particular point in time in the process that we’re involved in.

The only time that Rice mentioned “tsunami” was here (emphasis added):

RICE: Yet when judging a course of action, I will never forget that the true measure of its worth is its effectiveness. Our second great task is to strengthen the community of democracy so that all free nations are equal to the work before us. Free peoples everywhere are heartened by the success of democracy around the globe. Together, we must build on that success. We face many challenges. In some parts of the world, an extremist view threatens the very existence of political liberty. Disease and poverty have the potential to destabilize whole nations and whole regions. Corruption can sap the foundations of democracy. And some elected leaders have taken illiberal steps that if not corrected could undermine hard-won progress for democracy. We must do all that we can to ensure that nations which make the hard choices and do the hard work to join the free world deliver on the high hopes of those citizens for better lives. From the Philippines to Colombia to the nations of Africa, we are strengthening counterterrorism cooperation with nations that have a will to fight terror, but need help with the means. We’re spending billions to fight AIDS and tuberculosis and malaria and other diseases, to alleviate suffering for millions and help end public health crises. America has always been generous in helping countries recover from natural disasters and today we are providing money and personnel to ease the suffering of the millions afflicted by the tsunami and to help rebuild those nations’ infrastructure. We are joining with developing nations to fight corruption, instill the rule of law and create a culture of transparency. In much of Latin America and Africa, we face the twin challenges of helping to bolster democratic change while alleviating poverty and hopelessness. We will work with reformers in those regions who are committed to the increasing opportunity for their peoples and we will insist that leaders who are elected democratically have an obligation to govern democratically. Our third great task is to spread democracy and freedom throughout the world. I spoke earlier of the grave setbacks to democracy in the first half of the 20th century. The second half of the century saw an advance of democracy that was far more dramatic.

Again, there didn’t seem to be anything about the natural disaster worth blasting.

Perhaps the transcript is off; we should always keep this possibility in mind, since transcribers are imperfect. Perhaps I’m missing an important part: if you find Boxer’s reference, please inform me, and I’ll post an update.

But if there is, in fact, no such statement, then I can understand why Rice said: “I would hope that we can have this conversation and discuss what happened before and what went on before and what I said, without impugning my credibility or my integrity.”

“I do agree that the tsunami was a wonderful opportunity to show not just the US government, but the heart of the American people, and I think it has paid great dividends for us,” she said.

But, as of 7:12 p.m. eastern, it’s nowhere in the FDCH e-Media transcript used by the NYT. Both the NYT [RSS] and the Washington Post stories mention the Boxer exchange, though they have nothing on the tsunami statement.

At this point, I’m as confused as you probably are. My inclination is to side with the transcript, since it’s attempted to capture the entire hearing in full — not simply pick quotations — but, again, it could be wrong.

Update: Like the NYT and WaPo, the LA Times covers the Boxer exchange but has nothing on the tsunami. The AP’s collection of quotations doesn’t have it, either, though it isn’t meant to be exhaustive.

Final Update: See the comments below for articles that have the quotation. As of 1:15 a.m. eastern, January 19, the transcript still doesn’t have it. I’m resigned to confusion. 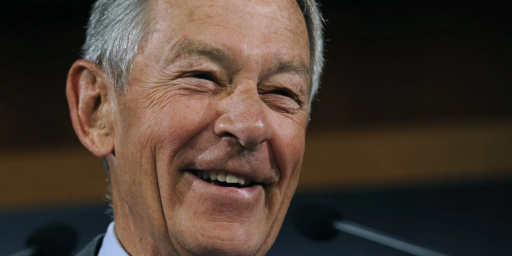