Steve Benen and DougJ give NewsBusters’ Tim Graham a hard time for noting that the Washington Post obituary for Patrick Swayze, who died overnight from pancreatic cancer, fails to give “Red Dawn” its due, quipping, “There are clearly no fortysomething Reaganites working in the Washington Post newsroom.”

I was prepared to chide Benen and DJ for failing to get a self-deprecating joke, titling the original draft of this post “A Wolverine Ate Their Sense of Humor,” until I clicked through and read Graham’s original.  Sadly, his irony must be too subtle for me as well, as he titles the post “WaPo Patrick Swayze Obit Gets to His Drag-Queen Movie Before ‘Red Dawn'” and begins “Here’s a sign the Washington Post is a liberal newspaper.”  Later, he observes,

“Red Dawn” was not a prestigious film, but it was a breakout lead role for Swayze, and a completely shocking product coming out of a Hollywood: a movie about American teens fighting a resistance against a Soviet invasion of the United States.

While I haven’t seen the movie since college, I do recall it being quite enjoyable, although not as much so as “Taps,” another kids-go-martial flick of the same era.  But it’s not the sort of thing a film critic is going to gush over.  Heck, they even give short shrift to my favorite Swayze movie, “Next of Kin,” for reasons I perfectly understand.

Regardless, Swayze made quite a few good movies and seemed like a pretty good fellow.  It’s a shame that he died so young. 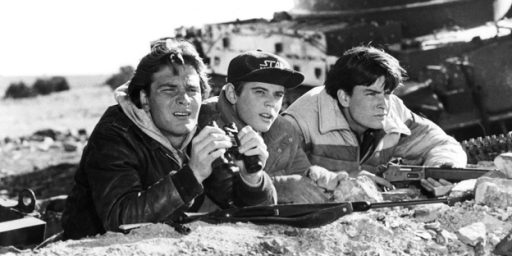