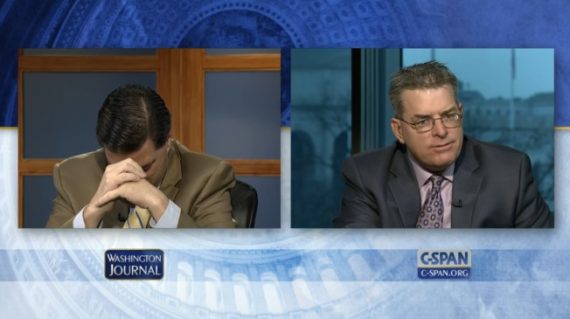 No matter how your day is going at least you can say it didn’t start out with Mom calling in to C-Span while you were a guest, unless of course your names are Brad and Dallas Woodhouse:

C-SPAN guests usually go on prepared for the occasional offensive question from a caller but when Dallas and Brad Woodhouse went on to Washington Journal Tuesday they got something different: a call from their mother.

The Woodhouse brothers are on opposite sides of the political spectrum. Brad is a Democratic operative who helps run the super PAC American Bridge and Dallas, by contrast, is a Republican who helps run the conservative Carolina Rising. The were on C-SPAN to talk about their documentary, Woodhouse Divided, when their mother called in.

“Well, you’re right I’m from down south,” Joy Woodhouse began when she was introduced as “Joy in Raleigh, North Carolina.”

“And I’m you’re mother,” Joy continued as both brothers flinched. “And I disagree that all families are like ours. I don’t know many families that are fighting at Thanksgiving. I was very glad that this Thanksgiving was a year that you two were supposed to go to your in-laws. And I’m hoping you’ll have some of this out of your system when you come here for Christmas. I would really like a peaceful Christmas.” Brad likewise pulled a facepalm while his mother spoke\

The tone of voice that accompanied “Oh god, it’s Mom” is, of course, the best part.