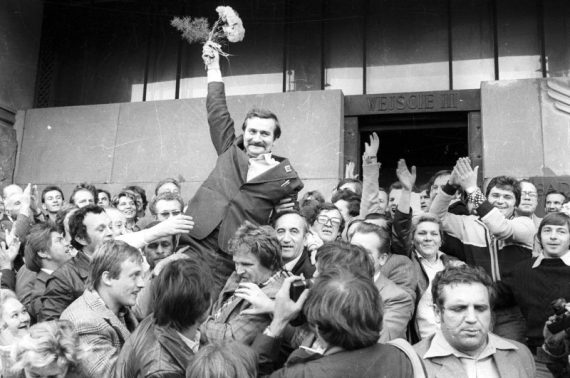 It turns out that there’s a bit of a back story to the U.S./Polish diplomatic  kerfuffle that erupted after Wednesday’s Medal of Freedom ceremony:

The Poles wanted Lech Walesa to receive the medal on Karski’s behalf, but the White House nixed the choice. Last year, during Mr. Obama’s visit to Poland, the hero of Solidarity refused to attend a large gathering to meet the younger leader. Mr. Walesa felt entitled to a tete-a-tete. Administration officials told Polish journalists that Mr. Walesa’s presence was too “political” for this week’s occasion. Poles read something else into it: Mr. Obama holds grudges. The counter-snub was the talk of Poland last week.

Former Foreign Minister Adam Rotfeld, a Polish Jew, stood in at the White House celebration. The Walesa episode was fading into memory when President Obama made his opening remarks. Karski was “smuggled into . . . a Polish death camp to see for himself,” he read off the teleprompter, that Jews were being murdered. On second reference, Mr. Obama noted it was a Nazi camp. Too late. The damage was done.

The likelihood is that President Obama didn’t want Walesa in the White House because Walesa has made critical remarks toward the president’s policies and in 2010 warned that the United States was slipping toward socialism. But rather than taking the mature and diplomatic path and respecting Walesa’s right to have a differing perspective, Obama chose to shun his lifetime of achievements.

Congratulating Walesa on his Nobel Prize in 1983, President Ronald Reagan said: “For too long, the Polish government has tried to make Lech Walesa a non-person and destroy the free trade-union movement that he helped to create in Poland. But no government can destroy the hopes that burn in the hearts of a people. The people of Poland have shown in their support of Solidarity, just as they showed in their support of His Holiness Pope John Paul II during his visit to Poland, that the government of that nation cannot make Lech Walesa a non-person, and they can’t turn his ideas into non-ideas.”

The White House should not treat President Walesa as a non-person, and they cannot turn his ideas into non-ideas.

To be fair, Walesa was being a bit prickly himself when he declined to go to the meeting with Obama last year, but this does put the whole “death camps” issue into a little more context as it seems that there was already some simmering tension between the two nations over what was supposed to be a celebration of a man who, along with Walesa and Pope John Paul II, is one of the heroes of 20th Century Polish history.