The new year will bring major changes to the White House Staff. 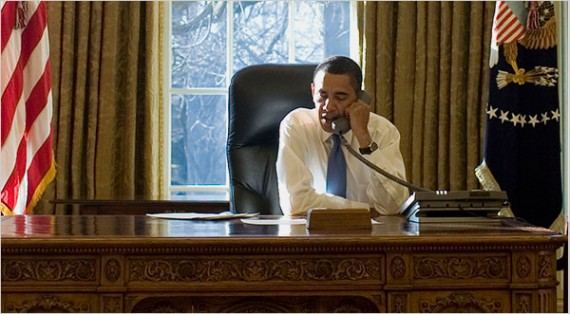 It looks like the new year will bring the first major staff shakeup in the West Wing:

WASHINGTON — President Obama is planning the first major reorganization of his administration, preparing to shuffle several positions in the West Wing as he tries to fortify his political team for the realities of divided government and his own re-election.

The president is studying how to maximize the power of the executive branch, advisers said, seeking insight from veterans of previous administrations and fresh advice from business leaders to guide the second half of his term.

He is reviewing the restructuring plan during the holidays, aides said, and intends to make the first announcements in the opening days of January.

A reshaping of the economic team, beginning by naming a new director of the National Economic Council, is among the most urgent priorities of the new year. Gene Sperling, a counselor to the Treasury secretary who held the position in the Clinton administration, is among the final contenders to succeed Lawrence H. Summers in the job, along with Roger C. Altman, a Wall Street investment banker who also served in the Clinton administration.

When Republicans assume control of the House on Jan. 5, ending four years of a full Democratic majority in Congress, the president’s approach to policy and politics is poised to change on several fronts.

The White House is hiring more lawyers to handle oversight investigations from the new Congress, even as the president sets up a re-election headquarters in Chicago and considers ways to streamline operations inside the West Wing.

The first personnel change inside the White House is the arrival of David Plouffe, who managed Mr. Obama’s presidential campaign. For the last two years, Mr. Plouffe has been one of the president’s closest outside confidants, but he is set to replace Mr. Axelrod as his chief political adviser, with a broad portfolio.

Jim Messina, a deputy White House chief of staff, will depart early next year to manage the re-election campaign in Chicago. His departure, along with those of others inside the West Wing, has created vacancies among the president’s top echelon of advisers that are at the heart of the reorganization plan.

At the final cabinet meeting of the year, on Dec. 8, the president renewed his request that if any members intended to step down, they needed to signal their intentions. White House officials said they believed that Defense Secretary Robert M. Gates is the only cabinet member who definitely plans to leave next year, although one other departure is possible.

There has been far less turnover for the Obama administration than for some of its recent predecessors. But at the midpoint of his term, several aides are considering new opportunities, including the White House press secretary, Robert Gibbs. Mr. Gibbs will probably either become a senior adviser to the president or work outside the White House, defending Mr. Obama on television and beginning to define the field of 2012 Republican presidential candidates. The leading contenders for his job are Jay Carney, a spokesman for Vice President Joseph R. Biden Jr., and Bill Burton, a deputy press secretary.

It’s been apparent for some time that the White House needed to shuffle staff, simply because it was failing spectacularly at getting the President’s message out and responding to Republican attacks. In fact, the departure of Rahm Emanuel and the rise of Acting Chief of Staff Pete Rouse has brought about a change in tone and tactics that many would say is responsible for the President’s success during the just-concluded lame duck session of Congress. Further changes, especially in the Communications shop, could work to the President’s advantage in the new political climate that he’ll face starting January 5th.

Most significant, though, is the news that Obama is looking for ways to utilize the power of the Executive Branch as a way of making end runs around a Republican Congress. Watch for that one in the new year, because I’m betting we’ll see a whole lot of Republicans start talking about an Imperial Presidency all of a sudden.