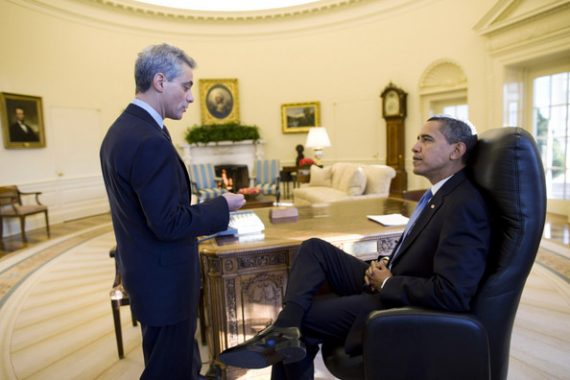 It didn’t take long for a response to be issued to the London Telegraph report about Rahm Emanuel’s departure from the White House which I wrote about this morning.

First, the White House dismissed the report as “ludicrous”:

The White House Monday dismissed as “ludicrous” a report that Chief of Staff Rahm Emanuel plans to leave his post after becoming frustrated with the Obama administration.

Citing Washington insiders, British newspaper The Daily Telegraph said Emanuel was fed up with the “idealism” of President Barack Obama’s closest advisers and was concerned about burning out and losing touch with his three children due to the pressure of the job.

In response to the report, a senior White House official told Fox News the “ludicrous” story was “not worth looking into.”

Not surprisingly, Rahm Emanuel was a little more colorful in his response:

Emanuel, known for his use of colorful language, e-mailed a response to CBS News chief White House Correspondent Chip Reid: “As I would say this is bs or as the english like to say baseless.”

So, that’s their response. Take it for what you will. Obviously, if Rahm does have a plan to leave the White House anytime in the next year or so, he’s not going to admit it now.

To be honest, though, I’m not sure that we can rely really on a British newspaper for insights about the internal workings of the White House staff. If there report were to appear in the Washington Post or New York Times, it arguably should be taken more seriously, but the Telegraph ? Not quite so much.

That said, I agree with Steven Taylor that it would not be at all surprising to see Emanuel leave at some point after the November elections whether it’s because of political ambitions or simple burnout. It’s also worth noting that Emanuel’s family still lives in Chicago and has still not permanently, or even semi-permanently, re-located to Washington, D.C. That alone is probably an indication that Emanuel never intended to be Chief of Staff for the entirety of Obama’s first term from the time he took the job.