Why Aren’t Racehorses Getting Faster?

Humans have been getting progressively bigger, faster, and stronger. Not so horses.

FiveThirtyEight’s Benjamin Harris declares, “American Pharoah’s A Superhorse, But He’s No Secretariat.” His sole basis for making the comparison is their relative performance in the Belmont Stakes:

Picture how far ahead of the field American Pharoah was at the end of the Belmont. Now double it (multiply by 2.4 to be exact). That’s about how far American Pharoah would have been lagging behind Secretariat (13 ¼ lengths). In a Belmont field featuring the 11 Triple Crown winners running their Belmont-winning times, Secretariat would have led the other horses by the following distances: 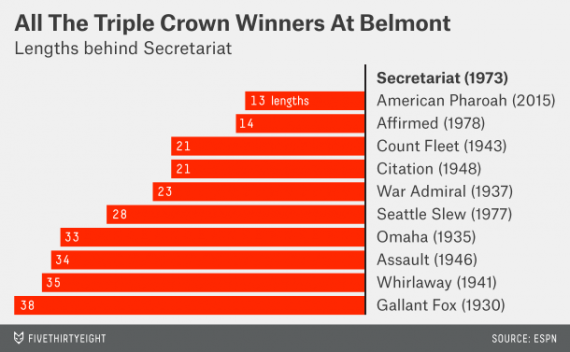 Presuming that time running twelve furlongs is the best measure of how “super” a racehorse is, that’s pretty compelling. But something else stands out to me from the comparison: the fact that horses—at least those running at the prestigious Belmont—haven’t gotten faster over the last several decades. Not only is the 1973 winner faster than the three subsequent winners–including the horse who won the race 42 years later—but horses that won the race in the 1930s and 1940s are faster than one who won in 1977.

By contrast, human beings have gotten progressively faster over the years.

Usain Bolt, winner of the 100 meter dash in the 2012 Olympics, finished the race some 12 meters ahead of Frank Jarvis, the top finisher in 1900,  and 20 meters ahead of Thomas Burke, who won the race in 1896. Indeed, it’s rare to find an instance where a winner was slower than any winner from a previous Olympiad. Moreover,  today’s women athletes are faster than the best men of a few decades ago. The top women sprinters are significantly faster than the legendary Jim Thorpe, much less the men from the turn of the 20th century.*

The same is true of virtually every human sport. At virtually every distance, today’s athletes are light years better than their predecessors and today’s women have lapped yesterdays’ men.

Why isn’t the same thing happening in horse racing? If anything, given decades of selective breeding of champions to champions—something that happens only by happenstance among humans—one would think that “superhorses” would be more common than ever.