Why Did Christopher Lee Resign So Fast?

Christopher Lee abruptly resigned from Congress mere hours after news broke that he was advertising for sex on Craigslist. Apparently, he was looking for trannies. 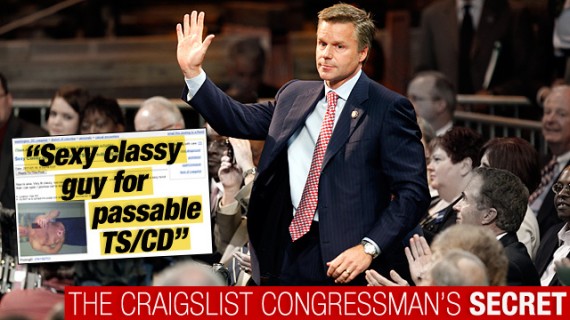 Earlier this month, New York Republican Christopher Lee abruptly resigned from Congress mere hours after news broke that he was advertising for sex on Craigslist.

Much speculation ensued as to why he didn’t fight harder to save his career. If this Gawker report is true, we have a pretty good idea:

Chris Lee’s resignation from the House on Feb. 9 may be the quickest political downfall in history: It came just three hours after Gawker published a photo of Lee standing in the mirror shirtless, along with a story about how the married congressman dabbled in a little online dating on Craigslist.

Lee’s sudden exit took many people by surprise. Hadn’t other members of Congress admitted to worse than an unconsummated, PG-13 flirtation and managed to stay in office? It turns out Lee may have had good reason to step out of the spotlight so quickly: It wasn’t just women that the Craigslist Congressman was hunting for on the Internet.

In the past 10 days, two D.C.-area transgender women contacted us, each with a separate story about exchanging emails with the ex-congressman. One sent us an ad that Lee allegedly posted on Craigslist in search of trans women; the other sent us a never-before-seen photo that she says Lee sent her after they started chatting by email. Taken together, they present a possible explanation to those who have wondered why such a tame “sex scandal” forced Lee’s hand so quickly.

Much more at the link, but I think you get the point.