Why Does USA Outspend G7 on Healthcare?

The US has always outspent our G7 brethren on healthcare but the divergence has skyrocketed over the last three decades.

Tyler Cowen points to this interesting graph of health care spending as a percentage of GDP in the G-7 countries: 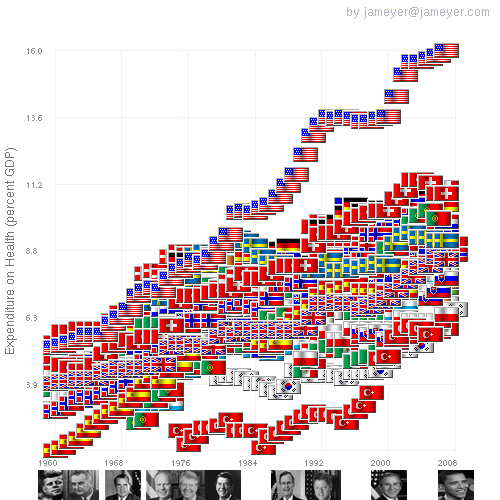 He asks, “What happened in 1980?”   It’s a good question.   While the US expenditure was higher than average the whole period and was accelerating quickly before 1980, we started to depart radically from the norm that year, had another explosion the the late 1980s/early 1990s and another one circa 2000.  Presumably, the prescription drug benefit largely explains the most recent spike.  But what of the earlier ones?

Despite the chart creator’s use of presidential photographs as lines of demarcation, I don’t think the occupant of the White House is the most significant variable.  But I don’t know what is.    One of Cowen’s commenters suggested that it’s the use of expensive imaging devices, which strikes me as plausible.  Another suggests the introduction of HMOs, adding an additional middle man.

jameyer, who posted the graphic back in February along with some related ones on life expectancy, doesn’t address this issue but he observes,

Life expectancy is by no means perfectly correlated with the quality of a healthcare system since cultural and economic factors intrude heavily.  Most notably, poverty, homicide, and accidental death can really skew the numbers.    And, even if we had a European-style public health system, we’d still spend more than they do because of our massive size and relatively low population density.

Still, the American belief that we’ve got the best health care system in the world and are therefore getting our money’s worth is increasingly hard to defend. 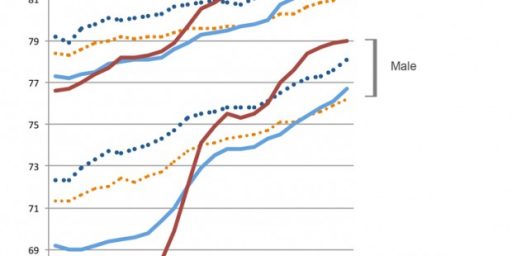 The Healthiest Place To Live Is, New York City?