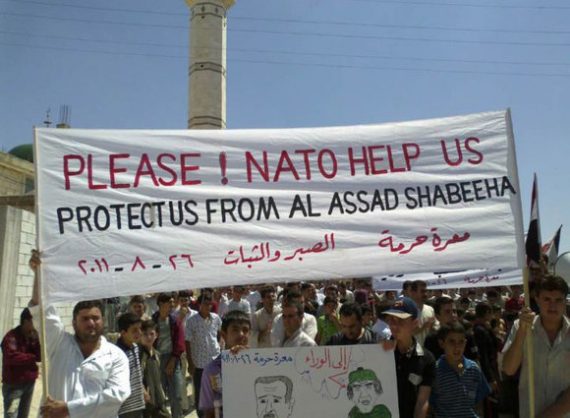 In this citizen journalism image made on a mobile phone and provided by Shaam News Network, Anti-Syrian President Bashar Assad protesters, hold up a banner pleading for help from Nato, during a demonstration against the Syrian regime, at Maaret Harma village, in Edlib province, Syria, on Friday Aug. 26, 2011. Syrian security forces killed at least two people as tens of thousands of anti-government protesters flooded the streets on the last Friday of the holy month of Ramadan, a time that many activists hoped would become a turning point in the uprising. (AP Photo/Shaam News Network) EDITORIAL USE ONLY, NO SALES, THE ASSOCIATED PRESS IS UNABLE TO INDEPENDENTLY VERIFY THE AUTHENTICITY, CONTENT, LOCATION OR DATE OF THIS HANDOUT PHOTO