The GOP is at a distinct disadvantage in the political fight over President Obama's Recess Appointment of Richard Cordray to head the CFPB. 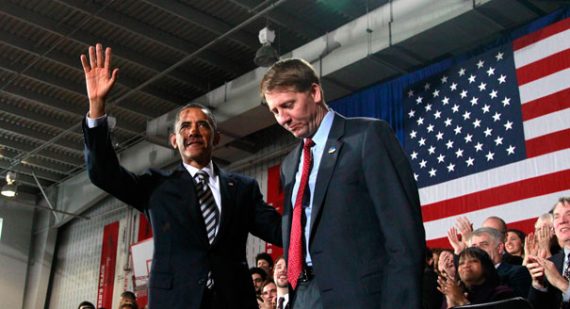 Alana Goodman passes on this excerpt from Charles Krauthammer last night on FNC:

It’s cynical and it works. Look, [opponents like me are] talking about process and procedure and what would look like arcana. And [the president is] arguing “I am protecting the little guy against the Republicans, who [use] constitutional niceties to protect the rich and the 1 percent, the ones who have robbed you.” It’s a good argument [politically]. He wins it. But I think it’s disgraceful.

Yep, that’s exactly right. First of all, there’s the fact that arguments over process are generally only of interest inside the Beltway, and even then only to people heavily invested in a particular policy. Republicans, and the conservative media, are trying to up the ante regarding these recess appointments by using inflammatory rhetoric to describe what happened here — the number of uses of words like “tyrannical” that I’ve seen in the last 24 hours is so high my eyes just tend to skip over the word at this point. As I noted yesterday, though, the reality is that the law is far from clear. There’s no doubt that what the Administration has done here is unprecedented, but that doesn’t mean that it’s unconstitutional. There are good arguments on both sides, although I think that the argument that these pro forma Congressional sessions are nothing more than a sham is rather persuasive. In any case, though, even if you agree with the argument that the appointment was Constitutionally inappropriate, calling it “tyrannical” is ridiculous and likely to make the eyes of the average voter glaze over.

Obama, on the other hand, framed Cordray’s appointment based on the merits of the policy as he sees them, and on economic populism. Consider this excerpt from the speech he gave in Shaker Heights, Ohio yesterday:

His job will be to protect families like yours from the abuses of the financial industry.  His job will be to make sure that you’ve got all the information you need to make important financial decisions.  Right away, he’ll start working to make sure millions of Americans are treated fairly by mortgage brokers and payday lenders and debt collectors.  In fact, just this week, his agency is opening up a simple 1-800 number that you can call to make sure you’re getting a fair deal on your mortgage, and hold banks and brokers accountable if you’re not.  (Applause.)

Now, I nominated Richard for this job last summer, so you may be wondering why am I appointing him today.  It would be a good question.  (Laughter.)  For almost half a year, Republicans in the Senate have blocked Richard’s confirmation.

Whether you agree with the President or not here, it’s not hard to see who has the better argument here from a political point of view. Krauthammer certainly does, and he grudgingly admits in his comments above that the President is going to win this political battle, which is really what all of this was about to begin with. It’s no mistake that this announcement was made on the day after the Iowa Caucuses (although the timing did apparently also have to do with the mechanics of how long Cordray would be able to serve without having to be confirmed by the Senate). This was the opening shot of the New Year in the Presidential race, and we can expect a lot more of it.

Republicans are on the right side of this issue, but they may have a hard time winning over the general public. Typically, you oppose appointments because of problems with the appointees, but here the GOP is opposing them because of problems with the agencies themselves. They don’t want the agencies to be able to operate, which sounds obstructionist on its face, and it doesn’t help that these agencies are ostensibly focused on issues like labor and consumer protection. This situation is tailor-made for Obama’s reelection strategy.

Exactly. The GOP has a good argument, I think, when it points out the fact that the CFPB will operate with less Congressional oversight than other Executive agencies, even such ostensibly independent regulatory bodies as the SEC and the CFTC. The fact that the new agency’s budget will come from a funding source not controlled by Congress further limits Congressional oversight abilities. These are important concerns that need to be addressed, but blocking the appointment of an otherwise qualified nominee to head the agency is not the way to do it. It plays into the obstructionist meme, and it unnecessarily hands an issue to the President that resounds very well with the public. There are ways to address revisions to the law in the future, and that should be done, but the GOP miscalculated here and they’re likely going to lose this battle if they press the point too far.