Basically, the answer is that nobody really thought there was much of a risk that a plane could be shot down. 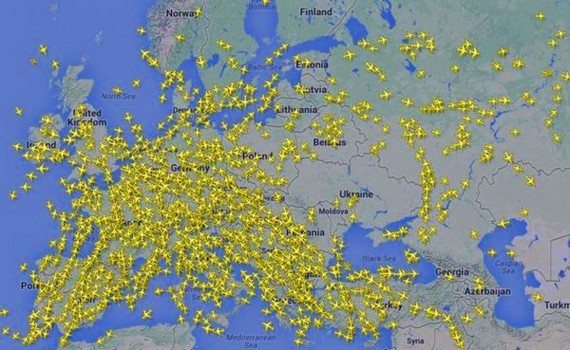 Yesterday’s tragic attack on Malaysia Airlines Flight 17 in the skies over eastern Ukraine has led many people to wonder why planes were flying over disputed territory to being with. After all, even though it’s apparently relatively easy to pick out on radar systems both due to their transponder signals and the fact that they are typically flying at altitudes that military planes do not, the possibility of a tragic accident, which is likely what this will turn out to have been in the end, remains. Additionally, both in the past several days and the past several weeks, there have been plenty of reports about planes being shot out of the sky by pro-Russian separatists and possibly others. Given that, it would seem to be prudent to have rerouted planes to avoid an area of potential danger. As it turns out, there have been some warnings issued regarding Ukrainian and Russian airspace over the past several months, but the area was still being heavily used by international carriers from many nations until yesterday morning:

In the hours after Thursday’s disaster involving a Malaysia Airlines jet, carriers around the globe began rerouting flights to avoid Ukraine. Some had been circumventing the country for weeks. Experts questioned the airline’s decision to fly near the fighting, even as Malaysia’s prime minister said that the plane’s route from Amsterdam to Kuala Lumpur was declared safe by international aviation authorities.

“I find it pretty remarkable that a civil airline company — if this aircraft was on the flight plan — that they are flight-planning over an area like that,” said Robert Francis, a former vice chairman of the National Transportation Safety Board.

Violence in Ukraine between government forces and pro-Russia rebels in the country’s east erupted a month after Russia annexed Ukraine’s Crimean Peninsula in March. Earlier this week, the rebels claimed responsibility for hitting a Ukrainian military jet with a portable surface-to-air missile; the pilot was able to land safely. And the government charged that a military transport plane was shot down by a missile fired from Russian territory.

In April, the U.S. Federal Aviation Administration cautioned airlines that Russia’s claim to the airspace over Ukraine’s Crimea could lead to conflicting air traffic control instructions. A few weeks later, the FAA issued a tougher warning, telling pilots not to fly over the area, and the U.N.’s International Civil Aviation Organization told governments to warn their airlines. Thursday’s crash, however, occurred outside the warning areas.

Thomas Routh, an aviation attorney in Chicago, said it would be unusual for an airline to ignore such warnings, but he said it’s up to airlines to decide whether a flight will be safe for crew and passengers.

“There are airlines flying through Afghanistan airspace every day,” Routh said.

John Cox, a former airline pilot and accident investigator, said despite the cautions, the airspace was not closed. The Malaysia Airlines crew filed a flight plan and “Russia and the Ukraine both accepted the airplane into their airspace,” he said.

The other factor, of course, is that nobody really thought that there was much of a risk to commercial airliners traveling at 32,000 feet because there had been very little indication that any of the belligerents were making wide use of the types of weapons that could reach that far into the air. As noted above, the main reason that the FAA restricted American carriers from flying over the Crimean Peninsula was not because they might be in danger of being shot down, but because there’s a dispute over who’s actually in charge of air traffic control in the area. Other parts of the eastern Ukraine were, generally, open to international air travel although there had been some individual carriers who had made the voluntarily decision to reroute their planes out of an abundance of caution. As a general rule, though, the airspace in question has been a common and apparently heavily traveled route for planes flying from Europe to Asia for a very long time and there was no reason to think that the planes flying in the skies over the area were in no real danger notwithstanding the conflict on the ground. Indeed, as noted in the linked article, international air travel over the skies in Afghanistan has been commonplace notwithstanding the decade-long war in that country.

There are plenty examples, of course, of the dangers of flying over disputed airspace. In 1983, Korean Airlines Flight 007 was shot down by Soviet jets after allegedly straying too close to Sakahlin Island, killing all 269 people on board. Five years later, Iran Air Flight 655 was shot from the sky by two missiles fired from the USS Vincennes during a time when the U.S. Navy was patrolling the Persian Gulf after attacks on international shipping from both sides in the Iran-Iraq War; that incident resulted in the death 274 passengers and 16 crew. Both cases appear to have been massive errors on the part of the Soviet and American militaries, although there was plenty of evidence at the time to suggest that there was simply no way that the Soviet pilots could not have known they were firing on a passenger jet. In any case, these two incidents are rare enough in history that it is, I suppose, understandable that regulators and airline companies would not consider the risk of their planes being shot down accidentally in areas like this to be very high. Unfortunately, as we learned yesterday, low risk doesn’t mean no risk.\

Photo of map showing flights diverting from Ukrainian airspace after shoot down of MH17 via Newsweek’s Twitter feed.